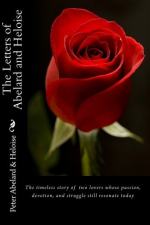 The Letters of Abelard and Heloise Summary & Study Guide

The Letters of Abelard and Heloise Summary & Study Guide Description

The Letters of Abelard and Heloise Summary & Study Guide includes comprehensive information and analysis to help you understand the book. This study guide contains the following sections:

This detailed literature summary also contains Topics for Discussion and a Free Quiz on The Letters of Abelard and Heloise by Peter Abelard.

The Letters of Abelard and Heloise tells the story of one of history's great real-world romance. The eleventh and twelfth century French theologian, philosopher and logician, Peter Abelard, was a famous and controversial man. Abelard grew up the son of a minor noble family and declined to become a knight like his father, instead focusing on philosophy. His great talent and upstart personality led him to get in disputes with his teachers, and due to his abilities, he often bested them. Because he often embarrassed prominent thinkers, many came to despise him. He was chased across provinces and threats were made against his life.

At the height of his powers, Abelard fell in love with his young student Heloise while he was living with her uncle, Fulbert. Heloise was widely recognized for her intelligence and impressed Abelard. Their love affair threatened to embarrass Abelard, and when Fulbert discovered their affair, they separated and met secretly. But Heloise became pregnant with Astralabe, their son. Abelard married Heloise in secret with Fulbert's approval, although and Heloise protested. Fulbert revealed the marriage but Heloise denied it and joined a convent at Abelard's urging. Fulbert was furious because he thought Abelard had abandoned Heloise and tragically had him castrated.

Abelard would then withdraw to the Abbey of Saint-Denis to become a monk, but he decided to return to studying and opened another school. Yet he still had many enemies, and he was charged with heresy at a Synod held in 1121 at Soissons. It was an infuriating and humiliating experience for Abelard. Afterward, monastery life continued to be difficult and. He withdrew to a hermitage, but when his students found him, he started a new school and monastery at Paracelete, which he ultimately had to leave and gave over to Heloise and her fellow nuns.

It was at this time that the letters of Abelard and Heloise are exchanged. In the first letter, Abelard writes of his struggles to a friend, but the letter is intercepted by Heloise, which she makes clear in the second letter where she accuses him of forcing her into the monastery and then ignoring her. In subsequent letters, Abelard rebuffs her accusations and Heloise continues to press them in response, all the while both making it clear that they still have deep feelings for one another. In their final exchange, Abelard advises Heloise on how to govern her and her fellow nuns' lives in accord with a Rule he set out for them on her request.

The last several letters are exchanged between Peter the Venerable, an abbot who is in possession of Abelard's remains and who has the authority to have Abelard absolved of his sins that anyone would publicly accuse him of, and Heloise. Heloise has pressed Peter to gain approval from the Pope to absolve Abelard and to send his remains to Paraclete. Peter happily obliges. Afterward, Abelard's official absolution is printed along with two of his hymns. Some contemporary records of these letters contain extensive commentary and notes on translations.