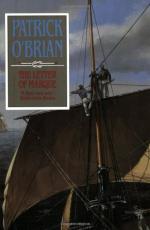 Patrick O'Brian
This Study Guide consists of approximately 31 pages of chapter summaries, quotes, character analysis, themes, and more - everything you need to sharpen your knowledge of The Letter of Marque.

The Letter of Marque Summary & Study Guide includes comprehensive information and analysis to help you understand the book. This study guide contains the following sections:

This detailed literature summary also contains Topics for Discussion and a Free Quiz on The Letter of Marque by Patrick O'Brian.

Jack Aubrey is penniless and disgraced, wrongly convicted of crimes and discharged from the Royal Navy. Stephen Maturin, Aubrey's particular friend, has purchased Surprise, a frigate recently sold out of the naval service. Maturin refits Surprise and Aubrey commands her on a series of short but lucrative raids. Aubrey's situation improves over time, and he is reinstated in the Royal Navy, while Maturin travels to Sweden and is reconciled with his beautiful wife Diana.

At the opening of the novel Jack Aubrey is penniless and disgraced. He has been convicted of crimes he did not commit and has been discharged from the Royal Navy. Stephen Maturin is wealthy but unhappy because he is estranged from his beautiful wife Diana Villiers, who has traveled to Sweden under the protection of a handsome man named Jagiello. Maturin has the good fortune of purchasing Surprise, a frigate being sold out of the Royal Navy. Maturin outfits Surprise as a private man-of-war, also known as a letter of marque. Aubrey commands the ship and finds many seamen willing to serve on a privateer with a captain known to be brave, decisive, and very lucky. Maturin invites his friend Nathaniel Martin to serve as assistant servant, and the appointment saves Martin from a destitute financial situation ashore. On the first brief shakedown cruise Surprise encounters Spartan, an American privateer. Spartan has just captured and sunk Azul, a Spanish ship heavily burdened with quicksilver. Fortunately for Aubrey, Spartan had transferred all of the quicksilver before Azul's sinking. With Spartan condemned as a legal prize, Aubrey, Maturin, and the crew of Surprise become instantly wealthy.

Surprise next travels to the French port of St. Martin, where a French man-of-war, Diane, is anchored. After extensive planning, a bold nighttime raid is launched on the harbor by the ship's boats while Surprise stands offshore and causes a diversion. Aubrey leads his men to Diane and she is seized by a surprise boarding action. After a heated battle, Diane is captured, as are two gunboats and two merchant ships. The small flotilla of prizes sails out of the harbor, but Aubrey collapses from a pistol shot to the back. With the five new prizes condemned as legal, Aubrey, Maturin, and the crew of Surprise becomes wealthier still; under Maturin's care Aubrey quickly regains his health. Aubrey then engages in various political activities and gains his deceased father's political position, an advantage that guarantees his reinstatement in the Royal Navy. Meanwhile, Maturin travels to Sweden aboard the star-crossed Leopard. He finds Diana in excellent spirits and health, returns to her a cherished blue diamond, and is reconciled with her. The novel thus ends on a happy note all around and the various protagonists board Surprise for a happy return to England.

More summaries and resources for teaching or studying The Letter of Marque.

The Letter of Marque from BookRags. (c)2022 BookRags, Inc. All rights reserved.