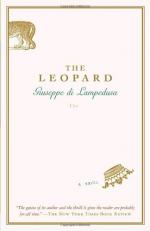 Giuseppe Tomasi di Lampedusa
This Study Guide consists of approximately 48 pages of chapter summaries, quotes, character analysis, themes, and more - everything you need to sharpen your knowledge of The Leopard.

The Leopard Summary & Study Guide includes comprehensive information and analysis to help you understand the book. This study guide contains the following sections:

This detailed literature summary also contains Topics for Discussion and a Free Quiz on The Leopard by Giuseppe Tomasi di Lampedusa.

The Leopard is the story of a middle-aged, Sicilian aristocrat caught in the middle of a political and personal revolution. As his influence and status are eroded in the wake of a working class rebellion, his sense of status and self-importance is eroded in the wake of his personal encounters with ambitious members of the working class and with his own superficiality. As the narrative follows the aristocrat, known as the Prince, to the ultimate confrontation with the inevitable and universal process of change, it develops themes relating to the shallowness of religious faith and the futile power of money.

This novel, set in 1860's Sicily (a time of considerable socio-political upheaval), follows the life and career of Prince Fabrizio de Salinas, or simply the Prince as he's referred to throughout the novel. The narrative begins with a description of what, for the Prince, is a normal evening - prayers with his family, fondly exasperated worries about a beloved nephew, a walk with his joyful dog, and visits from his crafty tenants. All the while, however, his generally easy temper is put on edge by awareness that change is in the wind - there is a revolution brewing, in which his nephew is participating and which, he (the Prince) fears will result in the eventual loss of his status. Throughout the novel, he struggles to convince himself that this loss, this fundamental change in the nature of his existence, is inevitable, necessary, and good. Later events, however, make that difficult.

Those events include the revolution itself, which takes place at a geographical distance, but which hit close to home. His nephew comes home from battle wounded, his (the Prince's) freedom to travel now comes at the cost of considerable negotiations and considerable bribes, and his economic and social status are both equaled by a ruthless middle-class merchant. The daughter of that merchant, meanwhile, attracted by the nephew's upper-class social standing, works towards attracting and marrying the nephew. At the same time, uncle and nephew, both attracted to the daughter's seemingly endless monetary resources, work towards the same end. Caught in the middle of their manipulations is the Prince's daughter, in love with the nephew but discarded when her perceptive, pointed, thoughtless comments about what she sees as bad behavior quite literally push him into the arms of the merchant's daughter.

The nephew and the merchant's daughter delude themselves that they're deeply in love and truly meant for each other, but narration makes it clear that they are in the relationship solely for what they can get from each other. Meanwhile, the fathers of the bride and the groom negotiate a marriage arrangement, and the Prince's daughter withdraws into a shell of bitterness and resentment. The Prince, too, begins to withdraw from both the high class social life in which he once rejoiced and from life itself. As his body begins to shut down, so do his emotional resistances to the processes of change that are resulting in his social life becoming repugnantly shallow and superficial to him. Finally, he succumbs to the ultimate, and most inevitable, process of change there is, surrendering his physical life to what he perceives as the true, transcendent, ultimate source of joy.

The novel's final chapter narrates an incident in the late life of the Prince's daughter, in which she comes to realize that the incidents that led her to disdain her one-time beloved and to a life of bitterness were, in fact, the result of a misunderstanding. She comes to realize that she has lost an opportunity for joy, and that the time has come to get rid of all her bitterness and anger. The novel's final image is one of rejection of the past and simultaneous willingness to at least begin to move on, a final manifestation of the book's over-arching theme relating to the inevitability of change and the potential for joy inherent in embracing it rather than struggling against it.