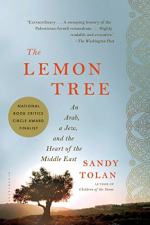 Sandy Tolan
This Study Guide consists of approximately 49 pages of chapter summaries, quotes, character analysis, themes, and more - everything you need to sharpen your knowledge of The Lemon Tree.

This detailed literature summary also contains Quotes and a Free Quiz on The Lemon Tree by Sandy Tolan.

In 1967, Bashir Khairi and two of his cousins travel to their hometown, Al-Ramla, which they have not seen in nineteen years ever since Arabs were driven from their homes and forced to live as refugees. In the same home that Bashir abandoned, a Jewish girl named Dalia Eshkenazi is grateful for a place where her people can be safe after the horrors of the Holocaust. Both their families have suffered, and both have lived in fear of the other's people, viewing them as the enemy. However, when Bashir visits his old home and asks for a chance to look around inside, Dalia feels an instinctive connection with him and lets him into the home. Despite their differences, Bashir feels the same connection and invites Dalia to visit his family in their new home in Ramallah, though he never expects to hear from her again.

Moved by her encounter with Bashir, Dalia begins asking questions about assumptions she has made about the Palestinian people and her own peoples' role in driving them from their homes. She takes Bashir up on his offer to visit in Ramallah and is moved by the generosity and hospitality his family shows her. Dalia and Bashir discuss their different points of view, and though they do not see eye-to-eye on everything, both are encouraged by their ability to understand more about the other side's ideas more than they ever have before.

Circumstances intervene, and Dalia and Bashir do not see each other again for some time. Bashir is arrested for his alleged role in violent attacks made by Palestinian forces, and Dalia feels betrayed by this, believing that conversation and understanding are the way to make change, not violence. However, she still feels compelled to write to Bashir to remind him of their previous friendship and express her views. Bashir writes in response, and respect is maintained between the two, even though they still do not always agree. Dalia maintains contact mostly with Bashir's family through the years, since Bashir is in and out of prison, though they do have the chance to come face-to-face again and marvel at how much they have meant to each other over time.

Dalia's parents die and she is left the house that once belonged to the Khairi family. Ramla is still a dangerous place for Arab families to live, so the Khairi family cannot return. Instead, with Bashir's blessing, Dalia donates the home to become a school where Palestinian and Israeli children can learn together side-by-side and attempt to build a better future. The lemon tree, which the Khairis planted in the backyard and which has become a symbol of their heritage, dies; the students at the school plant another one next to it, symbolizing their hope for the future. Bashir and Dalia are no longer in contact with one another, but continue to respect each other and honor the bond between them.

More summaries and resources for teaching or studying The Lemon Tree.