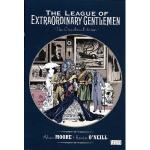 Alan Moore
This Study Guide consists of approximately 39 pages of chapter summaries, quotes, character analysis, themes, and more - everything you need to sharpen your knowledge of The League of Extraordinary Gentlemen.

The League of Extraordinary Gentlemen Summary & Study Guide includes comprehensive information and analysis to help you understand the book. This study guide contains the following sections:

This detailed literature summary also contains Topics for Discussion and a Free Quiz on The League of Extraordinary Gentlemen by Alan Moore.

Faced with an apparent weapon of mass destruction, British intelligence recruits a quintet of individuals with extraordinary ability to seek out and neutralize the menace. The assembled league of extraordinary gentlemen, ironically led by a young woman, recovers the essential component of the weapon only to discover they have been double-crossed by British intelligence, which plans to use the component in a weapon of their own. The league intervenes once again and saves the day.

The British Military Intelligence, Section 5 (e.g., MI5) is led by the infamous evil-genius Professor James Moriarty. Moriarty's right-hand man, Campion Bond, works as a public go-between to conceal identities and motives. Bond contacts Miss Wilhelmina Murray, recently divorced, and recruits her as the leader of the forming league of extraordinary gentlemen from whence the graphic novel derives its title. Murray, recently divorced and having survived the advances and attacks of Count Dracula, is joined by Captain Nemo and his famous submarine the Nautilus. They travel to Arabia where Murray recruits the famous adventurer and great white hunter Allan Quatermain. Quatermain has spent the last several years incognito as an opium addict, but Murray's youthful beauty and radiant personality instantly capture his devotion. The threesome then travels to Paris where they enlist the aid of Chevalier Auguste Dupin to locate one Dr. Henry Jekyll. Jekyll is living a life of obscurity in a largely unsuccessful attempt to restrain his inner demon, the barbaric Edward Hyde. Adding this multiple-personality, transmogrifying monster to their team, the league then returns to London, where they visit the sexually-charged grounds of a girls' reform school to investigate several cases of putative Immaculate Conception. At the school, they bring to bay Hawley Griffin, the invisible man, and force him to cease his sexual depredation of the hapless student body. The quintet—the league of extraordinary gentlemen—is thus founded.

The five characters are then informed of the purpose of their recruitment. A recent invention—cavorite—promises the capability of powered flight and hints at the possibility of a massive aerial bombardment, against which there could be no defense. Fortunately, the cavorite is a British invention—but unfortunately the existing material has been purloined by the evil Lord of Limehouse, a Chinese crime lord who plans to bomb the half of London he does not control. The team pursues the Lord of Limehouse and through several desperate exploits manages to recover the cavorite, which is turned over to MI5—and thus unwittingly turned over to the evil Moriarty, who plans to use it to bomb the half of London he does not control (that is, the half of London controlled by the Lord of Limehouse). Realizing they have been unwittingly duped as pawns in a criminal power struggle, the league moves decisively to intervene. They board Moriarty's airship just as it commences firebombing Limehouse, and shut down the entire operation just in time.

More summaries and resources for teaching or studying The League of Extraordinary Gentlemen.

The League of Extraordinary Gentlemen from BookRags. (c)2022 BookRags, Inc. All rights reserved.