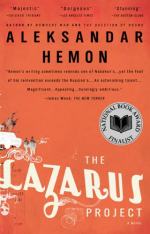 A letter is delivered to Chief Shippy by Lazarus on the morning of March 2, 1908. Shippy believes the letter to be a symbolic harbinger of death, wherein Shippy will momentarily be killed. This compels Shippy to shoot Lazarus instead. It is later learned the letter was written to Shippy by local business owner Eichgreen, who wanted to warn Shippy of Emma Goldman’s coming to Chicago. Taube believes the letter was Eichgreen’s way of keeping Lazarus out of the anarchist web by presenting him as a trustworthy messenger only nominally associated with the Anarchists. The letter itself ultimately becomes symbolic of the mystery of Lazarus's true purpose in being at Shippy's.