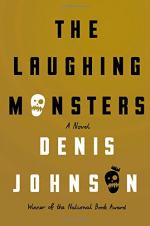 Related Topics
Tree of Smoke
Train Dreams
Angels: A Novel
The Largesse of the Sea Maiden
The Stars at Noon

This detailed literature summary also contains Quotes and a Free Quiz on The Laughing Monsters by Denis Johnson.

“The Laughing Monsters” by Denis Johnson is the story of two old friends and colleagues who reunite on another adventure in West Africa where they first met. Their first encounter together was in Freetown in 2001, just after the 9/11 terrorist attacks in America. Intelligence and counterintelligence was escalated exponentially around the globe after the attack on New York and Washington and the African nations were no exception.

Michael is a native Congolese and is handsome and charming. He has had some four fiancées and brings with him to Freetown his fifth fiancée whom he met when he was training international groups at Fort Carson in Colorado. Davidia St. Claire is a beautiful African-American who is also the daughter of Michael’s former U.S. commander.

Although Roland has been invited to Freetown to travel with Michael and Davidia to Michael’s tribe in Uganda to get his people’s blessing for his marriage, Roland is also working as an attaché for NATO and the American intelligence to keep an eye on Michael and report in on his activities. He has drawn the attention of the intelligence world because he is suspected of dealing in enriched uranium – something that must be stopped before it gets into the wrong hands. Roland, of course, does not reveal his duality to Michael or to Davidia.

Michael is always thinking and planning. He and Roland profited greatly during the Sierra Leone civil war some time ago. Michael has plans for the two of them to strike again. Although he is vague and continues to tell Roland that he all will be revealed eventually, Roland is not able to pin down exactly what Michael is up to. As a result, Roland has no recourse other than to send in NTRs – nothing to report reports – to his superiors which draws suspicion onto him. It is suspected that Roland may have jumped shipped and aligned himself with Michael and whatever money-making scheme he is cooking up.

At the same time, Roland is dealing with Hamid who offers him $20,000 for intelligence that includes maps to fiber-optics cable systems in Western African and the coordinates for NATO technological safe houses. It is not clear whether Roland is actually considering the deal or if it’s a ruse and part of his mission.

Roland, Michael and Davidia travel by plane, bus, car and foot on their long journey into Uganda to the village of his ancestors. Their journey is rife with deception, uncertainty and confusion. They meet many challenges and dangers. Ultimately, Roland is detained by intelligence officers who are vague about their loyalties. One of the officers who interrogate him finally admits that he is an attaché with U.S. Naval intelligence – but no names.

Roland has nothing to reveal because he has not learned what Michael is up to. The two old friends have a vicious fight in which Michael claims that Roland has betrayed him. Even though Michael threatens Roland with his machete, the two are able to reach back and reinvigorate their old relationship. Roland makes a decision about what side to come down on which is not revealed until the conclusion of the story.