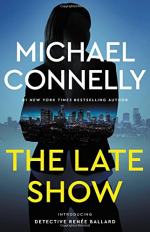 Connelly, Michael
This Study Guide consists of approximately 55 pages of chapter summaries, quotes, character analysis, themes, and more - everything you need to sharpen your knowledge of The Late Show.

This detailed literature summary also contains Quotes and a Free Quiz on The Late Show by Connelly, Michael.

The following version of this book was used to create this study guide: Connelly, Michael. The Late Show. Little Brown and Company, 2017.

Detective Renée Ballard and her partner John Jenkins were at an elderly woman’s home on a routine burglary call when they got a report of a vicious assault. At Hollywood Presbyterian Hospital, they learned that the victim was Ramona Ramone, a young trans woman sex worker who had been badly beaten with brass knuckles and left comatose by an unknown assailant. Ballard was immediately struck by the brutality of the assault and resolved to tackle the case herself. While still at the hospital, they received word of a mass shooting at the Dancers, a club in Santa Monica. Jenkins headed to the scene and Ballard waited for a wounded waitress, Cynthia Haddel, who was being rushed to the hospital. Haddel was pronounced dead on arrival, so Ballard collected the victim’s belongings and went to the Dancers, where four more men were dead. There she used Haddel’s keys to open her locker, which contained a vial of drugs she had been selling to club patrons. On her way out, Lieutenant Olivas, against whom Ballard had filed an unsuccessful sexual harassment complaint, stopped her, and mocked her for being such a departmental outsider that she had to work the night shift.

Ballard returned to the hospital morgue to take Haddel’s fingerprint to open her phone. She then met up with Jenkins to search Haddel’s apartment. When she found no further evidence, Ballard called Haddel’s parents to notify them of their daughter’s death. Afterward, Ballard and Jenkins returned to the police station to write up their reports of the night, but Ballard got stuck processing one of the witnesses from the Dancers. When Detective Chastain, her former partner who had failed to back up her claim against Lieutenant Olivas, showed up to interview the witness, he tried to apologize, but Ballard told him it was too little too late. With her shift over, Ballard set out in her van to pick up her dog Lola and head to Venice Beach. She had no apartment and instead chose to sleep in a tent on the beach where she surfed.

After a long nap, Ballard returned to the station and began researching the Ramone case. Using the departmental archive system, she found a perp named Thomas Trent who had been caught with illegal brass knuckles with a pattern that matched Ramone’s bruises. He worked as a salesman at an Acura dealership, and Ballard decided to pose as a potential buyer to scope him out. During her test drive with Trent, he made several transphobic comments and she noticed bruising on his knuckles. Ballard was so suspicious that she decided to scope out his house, which matched the description Ramona Ramone had given before slipping into a coma. She also visited the homeless encampment where Ramone had lived, where she learned she had been missing for over a week, meaning she was likely held captive and tortured for days.

Ballard was surprised to receive a call from the burgled elderly woman’s credit card service that the thief was living at a nearby motel. She headed there, where the counterman confirmed that Christopher Nettles, a paroled felon, had been carrying a gun and receiving packages of stolen goods. After calling backup, Ballard succeeded in arresting Nettles. She called her parole officer friend Rob Compton to come help, and afterward she went back to his place to have sex. In the morning, they spoke briefly about Ballard’s memories of her dead father, but their tryst was cut short when Ballard received word Chastain had been shot. Ballard rushed to the scene but was kicked out by Lieutenant Olivas. Deeply upset, Ballard decided to investigate the Dancers case on her own. She began by tracing Chastain’s movements the day before, and found he had spoken to a witness named Metro and one of the victim’s defense lawyers, Dean Towson. Each of the victims who had been in the booth with the shooter was involved somehow in organized crime. When Ballard spoke to Towson, he told her his client had been wearing a wire to record a corrupt police officer, information he could turn over to the D.A. in return for a lighter sentence on a drug charge. Ballard also went to Metro’s house, where his worried girlfriend told her he had been missing for days since the shooting. Ballard theorized that the dirty cop had been the shooter, and that he might have killed Metro too for knowing too much.

After her shift, Ballard was headed back to Venice with Lola when she got a call from her grandmother Tutu. Tutu told her a detective named Carr wanted to speak to her about the Chastain case. Ballard ignored this and went surfing, but when she returned to her tent Carr was waiting for her. Ballard was annoyed but spoke to him, and eventually decided to tell him her theory about a cop shooter. Carr told her it was ridiculous and Ballard stormed off. She decided to go back to work, even though it wasn’t her shift, and she headed to the Valley to interview Trent’s ex-wife Beatrice Beaupre. Beaupre was working as a director on a porn shoot, but she took a break to tell Ballard that she had left Trent because of his violent sexual fantasies. She also gave Ballard the key to his house. Ballard went back to the station to sleep in the bunk room, and in the morning she spoke to Carr once again. Carr had told her he knew she had been calling Metro repeatedly, and she told Carr she believed that whoever had given him this information might be the shooter, as only the shooter would have Metro’s phone. Carr told her he would investigate it. Ballard then got word that Ramona Ramone was out of her coma. However, her memory was still too damaged for her to pick Trent out of a pack of six photos.

Ballard decided to go to Ventura to visit Tutu. On her way up, she got a strange call from Trent about a potential car for sale, but she brushed it off as nothing. Carr also called to tell her that the police had gotten a court order to access Metro’s phone records. Ballard was frustrated but enjoyed relaxing with Tutu. She was waxing a surfboard when Trent crept up behind her and held her in a choke hold until she passed out. She woke up in his basement, where he told her he was going to torture and murder her as well as his ex-wife, whom he discovered had given Ballard his house key. He knocked her out with ketamine while he went to kidnap Beaupre, but Ballard woke before he returned and, with great difficulty, escaped her ties. When Trent returned, she attacked him and killed him with a sharp piece of broken chair leg. After police arrived, Ballard spoke to an investigator Joseph Feltzer to prove she had acted in self-defense. While this seemed straightforward to her, Ballard received a call the next day from a Los Angeles Times reporter who asked for a statement on her unjustified use of deadly force. Suspecting someone was trying to push her out of the LAPD, she tailed the reporter and found him meeting with Feltzer. She recorded their conversation, which was against departmental policy, and at her meeting with Feltzer the next day she used it to blackmail him into clearing her name.

Ballard left to advise Ramone to sue Trent’s estate, and then she finally to undergo a mandatory psych evaluation. After, she met with Compton to follow up on the Nettles case. Nettles had been in possession of a gun used in a major robbery homicide, and after he told them where he had stolen it from, they went on a stakeout. However, they spooked the man they were tailing and lost him. Compton took his frustration out on Ballard and she kicked him out of the car. Ballard returned to the station to more bad news: Carr believed Chastain himself had been the shooter, trying to get money to cover gambling debts, and that his murder had been a revenge hit. Ballard told him she didn’t believe it and that she would clear Chastain’s name.

Ballard was at a loss for what to do when a property clerk told her there was a package from Chastain that she hadn’t picked up. Inside were Haddel’s belongings and a card with the name Eric Higgs, followed by the acronym VMD. Ballard traced this to a professor at UC Irvine who specialized in Vacuum Metal Deposition, a special process for finding fingerprints. Ballard went to speak to Higgs, who told her Chastain had given him a button found at the Dancers crime scene to check for prints. The button belonged to a cop’s gun holster. Ballard took the print to her friend at the Latent Print Unit who scanned it and found it did indeed belong to a cop. The next day, Ballard asked Carr to come help her at the station. She had arrested Olivas and needed him to interview him. However, when Carr went into the interview room, Ballard and Olivas cuffed him. It was Carr’s fingerprint that had been on the button, and he had been trying to frame Chastain for his own crimes. After the arrest, Ballard went to a hotel where Chastain had sometimes stashed witnesses, and there she found the frightened Metro, who had identified Carr as the shooter after seeing him on the news. Exhausted, Ballard ended her shift and went to Venice. As she was surfing, a thick mist settled over the water and she was momentarily lost, but she followed the sound of Lola’s barking to return to the shore.

More summaries and resources for teaching or studying The Late Show.