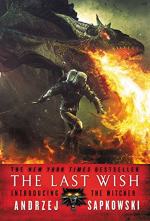 Sapkowski, Andrzej
This Study Guide consists of approximately 42 pages of chapter summaries, quotes, character analysis, themes, and more - everything you need to sharpen your knowledge of The Last Wish.

This detailed literature summary also contains Quotes and a Free Quiz on The Last Wish: Introducing The Witcher by Sapkowski, Andrzej.

The following version of this book was used to create the guide: Sapowski, Andrzej. The Last Wish: Introducing the Witcher. Orbit, 2008.

Sapowski’s novel is divided into seven chapters, each beginning with a section entitled “The Voice of Reason” followed by a stand alone short story with its own title. The novel is set in an alternative universe, where monsters plague humanity and where Geralt, a witcher, earns his living by killing these monsters.

Each section entitled “The Voice of Reason” is set in Melitele’s temple. It chronologically follows Geralt’s recovery after being attacked by a striga he was hunting. He seeks out the help of his old friend, the priestess Nenneke. He recognizes her as a great healer and stays at the temple for a few days. During his stay he argues with Nenneke about faith as well as his recovery. Nenneke is eager for him to undergo a trance in order to understand the darkness that surrounds him. Geralt refuses not wanting to know the future.

In the first short story “The Witcher,” we are introduced to Geralt and see how he received the wound he is recovering from throughout the novel. Geralt goes to the town Wyzim in order to get the 3000 oren reward for defeating a striga. This striga is a result of a curse put on the daughter of King Foltest as she is the product of his relationship with his deceased sister. The striga had been murdering and eating people for the past seven years every full moon. Many had tried to defeat the striga but all were either killed or ran away. Foltest had ordered that she was not to be killed, believing his daughter could be brought back. Geralt succeeds in reversing the spell after spending a night in the castle, however he is seriously wounded while fighting the monster.

In “A Grain of Truth,” Geralt encounters two dead bodies in the woods. He enters a castle nearby, trying to figure out what was responsible. He encounters the owner of the castle, Nivellen, a cursed prince that had been transformed into a monster. Nivellen tells him he had been trying to reverse his curse by paying merchants to spend time with their daughters, thinking about the myth of the frog being kissed by a pretty girl. He tells Geralt he has given up on this quest as he has been with many women and seen no change. He also reveals he is in love with Vereena, a creature he believes to be a rusalka. Geralt leaves but realizes that Vereena is responsible for the dead bodies and that she is not a rusalka but rather a bruxa, a type of vampire. He fights her but it is Nivellen that spears her through the chest. As she is dying she kisses/ bites Nivellen, curing him of his curse and revealing her true love for him.

“The Lesser Evil” describes Geralt’s adventure in Blaviken, where he comes across a wizard he knows from his past, Stregobor. Stregobor begs him to kill Renfri, a woman that has been hunting him due to his prior attempts to kill her. He tells Geralt she was born under “The Curse of the Black Sun” and is evil. Renfri approaches Geralt and asks him to kill Stregobor, telling him it is the “lesser evil”. Geralt advises Renfri to leave town and give up on her plan for revenge. She agrees but Geralt soon realizes that she was lying and that she was prepared to sacrifice innocent people in order to lure Stregobor out of his castle. Geralt kills Renfri and her men and is told by the alderman to never return to Blaviken.

Geralt attends a banquet at the bequest of Queen Calanthe in “A Question of Price”. She tells him she requires his services in order to deal with a problem she can not resolve herself. Geralt realizes she is asking for him to kill someone and he tells her that that is not his profession. The banquet is held for the queen’s daughter Princess Pavetta in order to pick a suitor and the future king. It is interrupted by a masked knight, Duny, who has come to claim Pavetta as she was promised to him by the late king. He reveals that he is cursed and that he is a creature from dawn until dusk. Calanthe orders for him to be killed, not wishing to honor her late husband. While the suitors fight, the upset princess uses her uncontrolled magic to create further chaos. Finally, Calanthe promises her daughter to Duny and the curse is broken.

In “The Edge of the World”, Dandelion and Geralt journey to Lower Posada, a town plagued by what they believe to be a devil. The devil has been eating their crops and taking grain as well as creating general mischief. They tell Geralt that they want him to drive this devil away without killing it. They reveal that Lilly, the prophetess of the town has forbidden any creature to be killed. Geralt identifies the creature as a sylvan and discovers he has been giving the grain to the starving elves in the mountains. The elves want to kill Geralt and Dandelion to prevent witnesses to their deal however they are stopped by Lilly and retreat back to the mountains.

“The Last Wish” begins with Dandelion and Geralt fishing. Dandelion pulls a jar out of the river and recognizes that a genie is inside. He releases the genie against Geralt’s advice and the genie attacks him. Geralt goes to the nearest town in order to help his injured friend. He seeks the help of the sorceress Yennefer. She agrees to help but decides she wants the genie for herself. While she is fighting with the genie, trying to contain him, the town is being destroyed. Geralt realizing that the genie is too powerful for her, goes to help her and tries to persuade her to let it go. Being the one who holds the seal to the jar, Geralt knows he is the one really controlling the genie and he uses his final wish to save Yennefer.

More summaries and resources for teaching or studying The Last Wish: Introducing The Witcher.