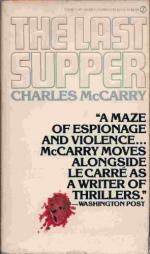 Charles McCarry
This Study Guide consists of approximately 67 pages of chapter summaries, quotes, character analysis, themes, and more - everything you need to sharpen your knowledge of The Last Supper.

The Last Supper: A Novel Summary & Study Guide includes comprehensive information and analysis to help you understand the book. This study guide contains the following sections:

This detailed literature summary also contains Topics for Discussion on The Last Supper: A Novel by Charles McCarry.

The Last Supper by Charles McCarry follows the careers of three American intelligence agents, Hubbard Christopher and his son Paul, and their associate Barnabas "Barney" Wolkowicz from World War II through the Nixon years. At the end, Barney confesses to having been a Soviet agent all along and confirms Paul's growing suspicions of what has really taken place.

American novelist Hubbard Christopher marries in Germany and with his son Paul is expelled by the Nazis in 1939. His wife Lori is arrested. Hubbard joins The Outfit of American intelligence and spends the war in Germany looking for Lori and developing a successful spy ring. Meanwhile, Barney is posted in Burma during the war with the cowardly Wadsorth "Waddy" Jessup, against whom he swears vengeance. Barney gets himself posted to Berlin as Hubbard's second-in-command. The Outfit in Europe so successfully that the Soviets kill Hubbard.

Paul joins The Outfit in his father's footsteps. He is posted to Indochina under Waddy, posing as a poet. He next goes to Vienna as Barney's second-in-command. Their joint mission with British intelligence ends, in Paul's opinion, in a fiasco, but the Director assures him that it is an unprecedented success. The Outfit cannot be bested by the Soviets. Working independently, Paul develops embarrassing theories that make him persona non grata and inspire the Vietnamese to take out a contract on his lover, Molly Benson. Paul heads back to Saigon to offer his life instead, but Molly dies in a hit-and-run reminiscent of Hubbard's death. Paul does not learn about this for ten years because his pilot in Vietnam lands them inside China and Paul is arrested as a dangerous counter revolutionary. He is sentenced to death but the execution is postponed twenty years to allow him to show remorse.

After ten years at hard labor in solitary confinement, Paul is released and flown home. He and Stephanie Webster, whom he knows as a child in Paris, become lovers. Paul uncovers details about all the things that he, his parents, and Molly have suffered, and leads a sting operation that brings down Barney, who admits that he has been a Soviet spy. Barney engineers everything to get even with the Yale types who lord it over others inside The Outfit and also to keep Paul alive despite his genius and tenacity. In particular, he lands Paul in the Chinese prison to keep him out of reach by Soviet assassins. Barney is proud of how Paul has figured everything out when no one else has a clue. Paul and Stephanie name their daughter Lori in his mother's memory.

More summaries and resources for teaching or studying The Last Supper: A Novel.

The Last Supper: A Novel from BookRags. (c)2022 BookRags, Inc. All rights reserved.