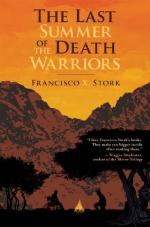 The Last Summer of the Death Warriors Summary & Study Guide

Francisco X. Stork
This Study Guide consists of approximately 47 pages of chapter summaries, quotes, character analysis, themes, and more - everything you need to sharpen your knowledge of The Last Summer of the Death Warriors.

The Last Summer of the Death Warriors Summary & Study Guide includes comprehensive information and analysis to help you understand the book. This study guide contains the following sections:

This detailed literature summary also contains Topics for Discussion on The Last Summer of the Death Warriors by Francisco X. Stork.

"The Last Summer of the Death Warriors" is the story of seventeen-year-old Pancho Sanchez's quest for revenge after his sister's death, and his friendship with cancer patient D.Q. that changes his mind about what's worth living and dying for.

At the opening of the novel, Pancho Sanchez is being driven to St. Anthony's home for boys. He has recently lost his father and older sister, and now Pancho is under the guardianship of New Mexico State. Pancho's sister, Rosa, was found dead in a motel room just a few weeks earlier. Although the police determined that Rosa's death was not suspicious, Pancho knows that she was murdered. When Rosa's body was found, there was evidence of sexual activity, and there was alcohol found in her system. Rosa was mentally disabled and had the mind of a ten-year-old child, so she shouldn't have been having sex. Also, she was deathly allergic to alcohol and knew that drinking could kill her. As soon as he heard the coroner's report, Pancho knew that someone had taken advantage of Rosa's disability and given her alcohol. He plans to find that man and kill him.

When he arrives at St. Anthony's, Pancho has no intention of staying confined in the orphanage walls. Yet when he arrives, he's assigned to help care for D.Q., a boy his own age suffering from terminal cancer. When D.Q. is sent to a hospital in Albuquerque for treatment, the same city where Pancho believes Rosa's killer lives, Pancho jumps at the opportunity to escort him. With a revolver and $200 in his pocket, Pancho begins scouring the streets for a man named Robert Lewis, whom he has tracked down as Rosa's boyfriend. Meanwhile, D.Q. busily composes "The Death Warrior Manifesto," obsessively writing down his final thoughts before his body gives out. "The Death Warrior Manifesto" outlines D.Q.'s beliefs that everyone should fight for the lives, enjoying every possible second of love before their time on earth ends. When he leaves the hospital and is sent to Casa Esperanza, a rehabilitation center, to recuperate, he is reunited with Marisol, the nurse he has fallen in love with. Through every step of his treatment, Pancho is reluctantly at his side, yet as time goes on, a real bond is formed between the two boys. Despite his better judgment, Pancho begins to care about D.Q. and does what he can to make his friend's horrific cancer treatments bearable. Along the way, Pancho makes friends with other cancer patients, and with Marisol, the girl D.Q. has given his heart to.

Two weeks later, Pancho finds Robert Lewis and manages to locate his address. He has all he needs to fulfill his revenge. At the same time, Pancho realizes that he, too, has fallen in love with Marisol. Suddenly, Pancho is faced with a decision: throw away his life by murdering Robert Lewis and spending the rest of his life in prison, or possibly start a new life - one filled with love and opportunity. Pancho breaks in to Robert Lewis' house with every intention of killing him, but when he sees Robert pleading for his life, swearing that he loved Rosa and never meant for her to die, he backs down. At the end of the novel, Pancho has learned to live life as a death warrior, fighting for life and love no matter what life throws at you. When Rosa announces that Pancho's feelings are mutual - much to D.Q.'s heartbreak - Pancho believes, for the first time in his life, that he was a future.

More summaries and resources for teaching or studying The Last Summer of the Death Warriors.

The Last Summer of the Death Warriors from BookRags. (c)2022 BookRags, Inc. All rights reserved.