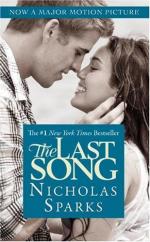 Nicholas Sparks (author)
This Study Guide consists of approximately 30 pages of chapter summaries, quotes, character analysis, themes, and more - everything you need to sharpen your knowledge of The Last Song.

This detailed literature summary also contains Topics for Discussion and a Free Quiz on The Last Song by Nicholas Sparks (author).

The Last Song is a novel by bestselling author Nicholas Sparks. In this novel, Ronnie Miller has spent the last three years not speaking to her father because of his decision to leave the family. However, Ronnie finds herself forced to spend the entire summer at her father's home in North Carolina. Initially, Ronnie does all she can to avoid her father by hanging out with a new friend on the beach, but overtime Ronnie finds herself reconnecting with her father in a more meaningful way than she could ever have imagined. The Last Song is a novel of growth and maturity, but also a novel of love that takes the reader's breath away.

Ronnie Miller is angry with her father for leaving the family without explanation. Ronnie assumes that her father had an affair and this is what has caused him to abandon her, her mother, and her little brother, Jonah. For this reason, Ronnie has stopped playing the piano, a passion she and her father once shared, and has not spoken to her father for three years. However, Ronnie finds herself forced to spend the summer with her father.

In the beginning, Ronnie spends as much time away from the house as possible. Ronnie makes a new friend in Blaze, a girl her age who is also struggling with parental issues. However, when Blaze's boyfriend, Marcus, makes a public pass on Ronnie, Blaze retaliates by setting Ronnie up for a shoplifting charge, her third in recent years. Ronnie finds herself forced to turn to her father for support as she tries to get everyone to believe that she did nothing wrong.

A short time later, Ronnie's father shows her a nest of turtle eggs. Ronnie becomes obsessed with the nest, frightened that a raccoon might attempt to eat the eggs before they emerge. Ronnie spends several nights sleeping beside the nest and harassing a volunteer at the local aquarium to place a cage over the nest to protect it. This volunteer, Will, is a local teenager Ronnie literally ran into on the beach her first day in North Carolina. Will decides to spend the night sleeping with the turtle nest beside Ronnie in order to protect it before the cage can be placed.

Ronnie and Will spend an afternoon together after sharing guard duty over the turtle eggs. Ronnie greatly enjoys herself. However, Ronnie begins to doubt herself and her trust in Will when a girl tells her that Will is a serial dater. Ronnie shuts Will out, but later regrets her actions, asking for his forgiveness. Will and Ronnie begin to see one another regularly. Will's friends resent Ronnie's presence in his life because of the time it takes him from them and Will's mother dislikes Ronnie. However, Will and Ronnie manage to forge ahead despite these difficulties.

On the day that the turtle eggs hatch, Ronnie discovers that her father is dying from stomach cancer. Ronnie is devastated by this news, especially due to the fact that she did not speak to him for such a long time. When Ronnie's mother comes to take her back to New York, Ronnie makes the decision to stay with her father and help him through the final stages of the illness. Ronnie shuts out everyone in her grief, including Will, struggling within herself to find a way to honor her father and make up for her childish behavior after the end of her parents' marriage. Eventually Ronnie realizes the best gift she can give to her father is to embrace her own gift, to return to the piano.

Ronnie finishes a song her father had been writing before his illness forced him to stop. Ronnie begins playing for her father each day as the cancer slowly takes away his life. After her father's death, Ronnie returns to New York and auditions to attend Julliard. Will, whom Ronnie thought was gone from her life for good, comes to New York to attend school and to be close to her.

More summaries and resources for teaching or studying The Last Song.