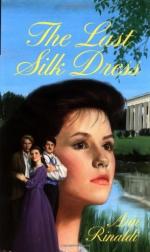 Ann Rinaldi
This Study Guide consists of approximately 27 pages of chapter summaries, quotes, character analysis, themes, and more - everything you need to sharpen your knowledge of The Last Silk Dress.

The Last Silk Dress is a novel by writer Ann Rinaldi. In this novel, Susan Dobson Chilmark wants to do something to help with the Confederate Cause during the war, but her mother will not allow her to join the usual sewing circles because of the mean gossip that is spreading due to her brother's refusal to join the Confederate army. Therefore, when Susan learns of a need to collect silk dresses to make a hot air balloon the Confederates can use to spy on the Union, she jumps at the chance to collect the dresses herself. Unfortunately, after her efforts to support the Cause, Susan learns some family secrets that make her question the basic values of the Confederacy. The Last Silk Dress is about a Southern girl caught between the past and the future as the Civil War rages around her, a novel of coming of age that will leave the reader sympathetic for the well-written young heroine, Susan.

Susan Chilmark is a fourteen-year-old girl as the novel begins. Susan wants to help out the Confederate Cause as the Civil War rages outside her safe little world, but Susan's mother will not allow her to join a proper sewing circle or join any of the other volunteer groups that works to aid the soldiers because of gossip around Richmond regarding her brother. Susan's brother left the family when he was only a few years older than her after a falling out with their parents. Rumor has it that Lucien Chilmark runs a brothel and has refused to join the Confederate Army.

Susan sneaks out of the house anyway, wearing boy's clothing that Lucien left behind in his room. While at the Spotswood Hotel awaiting word on the Battle of Manassas, Susan runs into a man who believes she is a theif. This man takes Susan into his coach and throttles her before he realizes she is a girl. At the man's business establishment, Susan admits to who she is and why she was wearing boy's clothing. The man turns out to be Susan's estranged brother, Lucien. Lucien shares a meal with Susan and then sends her home, making her promise not to come back to him unless it is an emergency.

After the Battle of Manassas, the injured are taken wherever a bed can be found. While Susan's mother refuses to take in a group of privates, their neighbor Mrs. Harrold takes in three privates. Susan helps to nurse the soldiers and is deeply saddened when the soldier she is caring for dies. A short time later, Susan's father comes home for a surprise visit while working on the battleship Virginia. Susan tells her father about meeting Lucien and he is surprisingly supportive of the relationship.

Susan is helping to sew sandbags with a group of local women, thanks to the patronage of Mrs. Wigfall, and learns that General Longstreet has expressed a desire to have a hot air balloon such as the Union uses to spy on troops. Susan volunteers to collect the dresses with the help of her best friend, Connie. However, when they come to the final day and have not been able to collect enough from the respectable women of Richmond, Susan talks Lucien into taking her to a brothel where she might collect dresses from the ladies there. Thrilled to be included, these ladies donate more than enough dresses for the cause.

After being forced to destroy the Viginia to keep it from falling into Union hands, Susan's father decides to join the army as an engineer. A short time later, Susan's father is killed scouting a dangerous area alone. Susan's mother is shocked to learn that the entire estate and all of their money has been left to Lucien, as well as the care of Susan. To get back at Lucien, Susan's mother tells Susan how her father had an affair with a household slave, eventually leading to the disagreement between him and Lucien. Susan also learns that her mother had an affair and that the man she thought was her father is not.

Susan goes to live with Lucien and realizes she no longer believes in the Confederacy and its Cause. Susan sees the hot air balloon she helped create on the river and she realizes she no longer wants the Confederacy to have it. Susan enlists the help of her friend, artist Timothy Tobias Collier, to arrange for the balloon to fall into Union hands. Afterward, Susan finds herself in danger from the local authorities for her actions. Hence, Lucien reluctantly agrees to take Susan north to the home of the Colliers.

More summaries and resources for teaching or studying The Last Silk Dress.