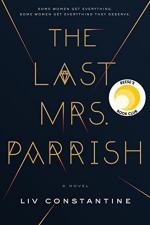 Liv Constantine
This Study Guide consists of approximately 49 pages of chapter summaries, quotes, character analysis, themes, and more - everything you need to sharpen your knowledge of The Last Mrs. Parrish.

This detailed literature summary also contains Quotes and a Free Quiz on The Last Mrs. Parrish by Liv Constantine.

The following version of this book was used to create this study guide: Constantine, Liv. The Last Mrs. Parrish. Harper Collins, 2017. Print.

In the first section, Part One: Amber, the third-person narrator zeroes in on Amber, a working class 26-year-old woman living in Connecticut. She went to the gym and staged a run-in with Daphne Parrish, the wife of a millionaire who runs his own international corporation. Daphne had a foundation dedicated to cystic fibrosis, and a sister who died from the disease. In order to get into her life, Amber pretended that she also had a sister who had died from the disease. Daphne invited Amber out for coffee and then asked her if she would like to volunteer to be on a committee that was currently planning a fundraiser. Amber agreed, and was delighted that her plan to befriend Daphne was going so well.

Years ago, after Amber had left Missouri because a marriage she had tried to engineer fell through, Amber had researched the Parishes and decided that she wanted to marry Jackson. Amber moved to his town, started researching his life, and bided her time until she could meet and befriend his wife. In the meantime, she got a job at a real estate office where she worked with a woman named Jenna who knew the nanny who worked for the Parishes when their first daughter, Tallulah had been born. She said that Daphne had been hospitalized for what might have been postpartum depression. Amber methodically got rid of anyone in her way as she got deeper into Daphne’s life. She outed the cochair of the committee, who was cheating on her husband, so that Daphne would need a new cochair and Amber could volunteer.

After the fundraiser turned out to be a success, Amber told Daphne that she had been fired from her job because her boss had sexually assaulted her. Daphne felt sorry for her so she got her a job working for Jackson. Daphne and Amber continued to spend all of their free time together. Amber was invited to many family events, like birthdays and Christmas, and she became very close with the girls, Tallulah and Bella. A woman from the committee, Meredith, researched Amber and told Daphne that she was not who she claimed to be, but Amber made up an excuse about changing her identity to hide from her father, who had sexually abused her, and Daphne seemed to believe her.

Amber started spending more time with Jackson out of the office. She changed her appearance and started trying to seduce him. One night when both of them accidentally showed up at the apartment in New York Daphne had told Amber she could use during the week, they slept together and began an affair. Amber wanted Jackson to leave Daphne and marry her, but he did not seem likely to do this anytime soon. Daphne told her that the one thing he wanted in life was a son, so Amber got pregnant and told him it was a boy. He said that he needed time to sort out his affairs before they did anything drastic.

In Part Two: Daphne, Daphne narrates her story in the first person starting with when she first met Jackson. After grad school, she had been trying to set up her foundation and was looking for sponsors when she met him. He offered to finance her whole project. They started going out for lunches together, and he eventually invited her over to his house where he drugged her drink and had sex with her. The next day, he sent her dozens of roses and she thought he was a bit too aggressive. But then her father had a heart attack and Jackson stepped in to help with everything. That Christmas, after her father was better, Jackson proposed to her, and despite her father’s initial hesitation, Daphne agreed.

Everything seemed fairytale perfect, but soon Daphne realized that Jackson was a sociopath with a desire for domination and humiliation. He controlled what she ate, what she read, where she went, how she dressed, when she got pregnant, and who she saw. When she tried to leave him, he said she was a danger to their daughter and had her committed to a mental asylum and paid off her doctors and the lawyers. When she was finally released, he threatened her with a gun and raped her. Trapped, Daphne did her best to protect her daughters and to keep on his good side for almost a decade.

When Amber came along, she thought she had finally found a friend to fill the lonely hole left by her sister’s death, but when Meredith told her about Amber’s true identity, Daphne became suspicious and hired a PR. She found out that Amber had seduced a boy from Missouri and gotten pregnant with his child. When he had refused to marry him, she had accused him of raping her and had him imprisoned. While he was in jail, he was beaten so that he had to use a wheelchair for the rest of his life. Amber’s mother found her diary and turned it into the police and Amber left town, abandoning her child so she would not have to face charges. With this information, Daphne decided to construct a plan of her own. She decided to help Amber seduce Jackson so that he would leave her.

In Section Three, both women are given separate chapters that are narrated by a third person narrator. Amber threatened to have an abortion if Jackson did not leave Daphne and marry her. Jackson agreed and told Daphne he wanted a divorce. After their divorce went through, Daphne brought him the file she had compiled on Amber and threatened to turn her into the cops and ruin his reputation if he did not sign over custody of the girls to her. Jackson agreed and Daphne moved to California with the girls and her mother. Jackson started mistreating Amber just as he had mistreated Daphne. Daphne orchestrated a federal investigation into Jackson’s company and went to gloat as he was arrested by the FBI. She stopped at Amber’s house in order to tell her what she had done. Amber begged her to help her get out of the marriage to Jackson, but Daphne refused and left to go write a letter to her sister, Julie.

More summaries and resources for teaching or studying The Last Mrs. Parrish.