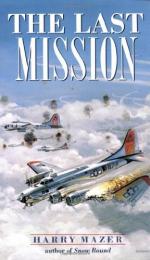 Harry Mazer
This Study Guide consists of approximately 29 pages of chapter summaries, quotes, character analysis, themes, and more - everything you need to sharpen your knowledge of The Last Mission.

This detailed literature summary also contains Topics for Discussion and a Free Quiz on The Last Mission by Harry Mazer.

The Last Mission is a novel by the author Harry Mazer. This novel is about Jack Raab, a fifteen-year-old boy who lies about his age in order to enlist in the Army during World War II. Jack wants to represent his family in the fight against Hitler. However, Jack underestimates how difficult being away from home will be as well as the dangers of fighting a war, even from the air. Jack survives more than twenty bombing missions, only to lose his entire crew on the final run. The Last Mission is a story of the passions that send young men to war and the reality that changes everything.

Jack Raab is in Louisiana training on a B-17 with his new crew. Jack has been in the Air Corps for a few months, longer than he imagined he would be. Jack lied about his age to get in and was sure someone would figure it out by now. However, no one seems to notice the small differences between Jack and his fellow soldiers. Jack notices the difference, though. Everyone else gets mail from their family and friends, but Jack does not. Jack cannot tell his family and friends where he is. Jack cannot visit his family when he goes home on furlough. Instead, Jack visits Dotty, a young woman he met while at basic training in Miami Beach.

After furlough, Jack is sent to Europe with the rest of his crew. Jack and his crew fly a plane called Godfathers, Inc. This is the name the entire crew chose because they are all godfathers to the newborn daughter of Pratt, a member of the crew. The first mission goes without a hitch despite the nerves of everyone on board. Before long, the missions become routine, even when the flak is flying around them, tearing holes in the plane's skin. However, one flight is not routine. While flying over Germany, Godfather, Inc. loses an engine. Martin, the pilot, turns the plane toward home. Before they reach the coast of England, another engine goes down. Martin is forced to ditch the plane into the English Channel. Luckily, however, all the crew members are able to get off the plane without trouble and they are rescued hours later.

Not long after Jack's sixteenth birthday, the Godfather II is sent out on a mission over Pilsen, Czechoslovakia. The lead plane does not release its bombs, so the Godfather II is forced to take a second run over the target. During this run, the wing is chopped nearly in half by flak. Jack is forced to parachute out. On the way down, Jack sees one of his crewmen below him and one above. Near the ground bullets start flying all around Jack. Jack sees the man above him fall slack. Jack hopes he is only playing dead. As soon as Jack hits the ground, he runs. Jack is able to outrun his pursuers. For several days, Jack walks the countryside, attempting to avoid capture. Unfortunately, Jack comes to a checkpoint he was not prepared for and is captured.

Jack goes back to the military base where he was stationed before the last mission. Jack learns that all of his crewmates are dead. From there, Jack is sent back to the United States. Jack has to wait for his records to come before he learns if he will be able to return home. By this time, Jack has gotten over his fear of discovery and contacted his family. Jack's family is anxious to have him back home. Jack decides to tell the Army the truth about his age. Jack is given an honorable discharge.

At home, Jack goes to visit the parents of one of his crewmen where he is able to assure them their son did not suffer. Jack also visits Dotty and tells her the truth about his age, effectively ending their budding romance. Jack spends the rest of the summer without aim, unsure what to do with his future. Finally Jack decides to go back to school. At school, Jack is asked to make a speech to his fellow students about his experiences in the war. Jack tells his classmates that war is horrible and he hopes it never happens again.

More summaries and resources for teaching or studying The Last Mission.