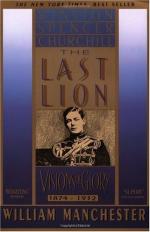 William Manchester
This Study Guide consists of approximately 69 pages of chapter summaries, quotes, character analysis, themes, and more - everything you need to sharpen your knowledge of The Last Lion.

This detailed literature summary also contains Topics for Discussion and a Free Quiz on The Last Lion: Winston Spencer Churchill by William Manchester.

The Last Lion Visions of Glory by William Manchester is a book about Winston Churchill and his family. It is a long but interesting book. The book tells the story of Winston's parents, Randolph and Jennie and what kind of marriage they had. Randolph is in the second stage of syphilis when he marries her. When he cannot touch Jennie any more she keeps company with other men. Randolph is a member of Parliament and holds the position as Chancellor of the Exchequer. Winston is a problem child—he is rebellious and has problems in school. Jennie and Randolph are often absent and he is raised by a nanny.

Winston's academic career is followed. He never expresses much interest in school until he is in military school. He has problems gaining entrance but he succeeds. His military career sends him to India, but he is more active as a news correspondent and spends his frequent leaves working as a reporter at conflicts in various parts of the world. He earns a little money at it. He covers the situation in the Middle East and in South Africa, where he is arrested and escapes from jail. Money is always a problem for the Churchill family.

His interest in politics is due to his father's position in Parliament and government. He loses his first bid for a seat in the House of Commons, but does not lose much after that. He wins his first seat in Oldham. During his career, he switches parties several times and is never afraid to say what he thinks no matter how unpopular. He is stubborn and sometimes difficult for those around him to work with. This is why he is often in trouble with the party leadership. He holds many different cabinet positions and many times loses them. After the loss of one during World War I, he joins his unit at the front in Flanders and lives and fights in the trenches with them. He is popular among his fellow soldiers.

Manchester traces Winston's political career with as much detail as he does his military and news correspondent career. The book has a lot of historical detail and facts which Manchester, an historian, is well qualified to present. He does a good job presenting the historical background of the situations in many of the countries, like South Africa and India. The reader does not have to wonder what he is talking about, because he sets the scenes for the action very well. There are a lot of quoted conversations and excerpts from letters written between Churchill, members of his family and friends and colleagues.

The book is long with many tedious facts. Manchester describes in detail the events that occur and the changes that occur in society in terms of history, culture, economics and politics, showing the depth of his research. The author's admiration of Winston Churchill is obvious and logical—Churchill was a great world figure.