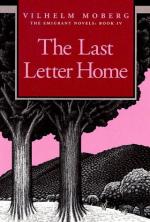 This detailed literature summary also contains Topics for Discussion and a Free Quiz on The Last Letter Home by Vilhelm Moberg.

When the Civil War breaks out in Part 1, Karl wants to enlist to serve his country, but Kristina objects to him becoming a murderer because she worries about his eternal soul. Luckily for Kristina, Karl's lame leg causes the doctors to reject him for service. Karl argues with Samuel Nojd about whether the land was stolen from the Indians or rightfully belongs to the settlers who bought it as the Sioux, suffering from famine during the harsh winter, sharpen their tomahawks. When Kristina gets sick, bleeding between her legs, Ulrika convinces her to go to the doctor who warns that her next childbed will kill her, and Karl endures the deprivation out of concern for his wife. Karl receives a letter from his sister, Lydia, in Sweden, informing him that their mother has died.

Though many Lutherans are swayed to the Baptist faith in Part 2, Kristina decides to stay with her baptism and her God until she dies. When the Astrakhan apple tree from her parental home in Sweden produces fruit, she is excited for the opportunity to share some of the Old Country with her children when the fruit ripens. After fully recuperating, Kristina convinces Karl to yield his body to her, but Karl is terrified when Kristina tells him she is pregnant some time later.

As the Sioux attack settlers in an attempt to reclaim their land, Kristina miscarries the baby, and Karl tends to her as she is stuck in bed, sending their children to safety with a neighbor since the women and children are evacuated due to the Indian attacks. Kristina's condition worsens, and she dies shortly after the Sioux are defeated. As he builds a coffin for his wife, Karl decides God is not trustworthy because Kristina trusted God to take care of her and God allowed her to die. When Ulrika chides him for killing his wife by yielding to his carnal desires, she is shocked at his blasphemy as Karl claims he will never forgive God for taking Kristina from him. Karl writes Lydia that the Civil War is over and the government promises good times.

In Part 3, Klas Albert marries Marta and, in exchange, gives Karl a map of Ljuder parish which Karl wants because it is consoling to have the place he was born on paper, though he will never return to his homeland. With his four sons grown, Karl undertakes the task of clearing the last of his land, an oak stand to the east of his house, but his back is injured when he is trapped under the last tree; however, he still refuses to submit to God. Karl writes Lydia that he has given his farm to Johan, his oldest son, and though he misses Sweden, he has never regretted his immigration.

In the Epilogue, American culture overtakes Swedish culture as Karl grows old. He is too pained to work much, so he spends his days watching his grandchildren play and recalling his youth while looking at his map of Ljuder parish. Though Karl still misses Kristina, he knows he will soon be buried next to her. Each evening, he walks around the settlement to ensure all is well. Karl's neighbor, Axel J. Anderson, writes Lydia to inform her that Karl died in his sleep on 12/7/1890 at the age of sixty-seven and will be greatly missed by his family and friends.