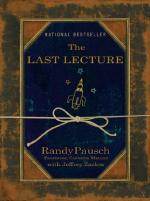 Randy Pausch
This Study Guide consists of approximately 23 pages of chapter summaries, quotes, character analysis, themes, and more - everything you need to sharpen your knowledge of The Last Lecture.

This detailed literature summary also contains Topics for Discussion and a Free Quiz on The Last Lecture by Randy Pausch.

In The Last Lecture by Randy Pausch with Jeffrey Zaslow, Randy looked like an average, healthy man, but looks can be deceiving. He had ten tumors on his liver, and he only had a short time to live. Carnegie Mellon, the university where he worked, offered a lecture series for students wherein educators shared advice based on lessons learned from their lives. Randy had his chance to share before he died.

When he was first diagnosed with pancreatic cancer, Randy was very optimistic. He had high hopes that he could beat the disease with radical treatment. Unfortunately, the most extensive surgeries and treatments weren't enough.

When Randy was asked to do the lecture, he looked forward to the chance to share what he had learned in life. His wife, Jai, was not as enthusiastic. She knew that he would pour a lot of time and energy into the lecture, and she wanted him to spend his last few months focusing on their family. She relented when she saw how much it meant to him to have a recording of his life lessons for their three children, with audience response accompanying the lecture. It was his chance to say goodbye to many people in his working world.

Preparing for the lecture was difficult, and Randy kept shuffling material until the last minute. He wondered if he was up to lecturing physically since he was suffering from the after-effects of chemotherapy. Once he hit the stage, he felt renewed.

Right from the start he addressed his illness, but went on to explain that the lecture was focused not on death, but rather on living out dreams. Starting with his youth, he showed how his own dreams came to fruition. Randy also went on to show how he was privileged enough to help others achieve their dreams, also. He highlighted lessons he learned along the way and offered advice to students on how to live life to the fullest. He also highlighted people who helped him achieve his dreams.

He spoke about how much his parents meant to him and how wonderful they were. They encouraged him to research and to dream. They also taught him about generosity and reaching out to others.

Randy talked about responsibility and working with others. This was a big deal to him. He had a very strong sense of positive work ethic, demonstrating how success came from a bit of luck but mostly from dedication and hard work. He emphasized how important it was to get along with others and find ways over and around walls and blocks that stood in the path to achieving dreams.

He talked about meeting his wife later in life. They had a very close relationship, but the closeness resulted from continuously working on the marriage. He talked about how they planned for her future without him. Randy also talked about how people were helping him deal with his situation and how much he appreciated it.

At the end of the lecture, Randy pointed out that the lecture was for his children. His greatest desire for them was for them to know he loved them. He also wanted them to grow up to follow their own dreams, facing life as they saw fit.

More summaries and resources for teaching or studying The Last Lecture.