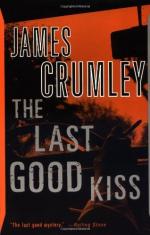 James Crumley
This Study Guide consists of approximately 39 pages of chapter summaries, quotes, character analysis, themes, and more - everything you need to sharpen your knowledge of The Last Good Kiss.

This detailed literature summary also contains Topics for Discussion and a Free Quiz on The Last Good Kiss by James Crumley.

This novel, written in the style and literary traditions of the so-called "hard boiled" crime novel, tells the story of private investigator CW Sughrue's search for a runaway young woman, missing for ten years. A parallel narrative explores the complex relationship between Sughrue, a wandering alcoholic novelist, and the three powerful women in the novelist's life. Aside from exploring themes common to novels of this genre (specifically, the corruptive potential of money, love, sex, and power), "The Last Good Kiss" also explores themes relating to the layering of identity and an individual's inability to escape his/her past.

The novel begins at the end of Sughrue's search for the missing Abraham Trahearne. Sughrue eventually learns that Trahearne is a famous novelist and respected poet, but when he finds him in a run-down bar in Sonoma California, Trahearne is just another drunk on the run from a domineering ex-wife. A confrontation in the bar results in Trahearne's being slightly injured and put in hospital. While he's waiting for Trahearne to be released, Sughrue is hired by bar owner Rosie to find her beloved daughter Betty Sue, missing for ten years. When he hears of this, Trahearne insists that he accompany Sughrue on his investigation—for a lark, he says. Sughrue reluctantly agrees—against his better judgment, he enjoys Trahearne's company.

While all of this is going on, Sughrue is also taking care of the frequently drunk, desperately sexual, deeply troubled Trahearne, driving back and forth between the investigations in California and Trahearne's home in Montana. Sughrue is surprised to learn that Trahearne's ex-wife Catherine and mother Edna live together in a house just across the street where Trahearne lives with his current wife, Melinda. He's not so surprised when he discovers that Catherine and Edna both despise Melinda, and want control over Trahearne, his life, and his work. The seductive Catherine manipulates Sughrue into having sex with her, with the clear intent of gaining his help in her attempts to control her ex-husband. Sughrue, however, resists her attempts to control him, partly because he's fallen a little in love with Melinda and partly because he doesn't want Trahearne to be controlled.

Meanwhile, Rosie receives word that Betty Sue is still alive, and sends Sughrue (now a little in love with Betty Sue—or at least the photograph of her given to him by Rosie) back on the trail, where he soon discovers that Betty Sue and Melinda are the same person. When he confronts her, Betty Sue confesses that after getting out of jail she was desperate to create a new life and identity for herself, and so became Melinda. Sughrue concludes that Trahearne knew about his wife's past, that he couldn't find out the truth himself, and manipulated events so that Sughrue did the legwork for him.

More summaries and resources for teaching or studying The Last Good Kiss.