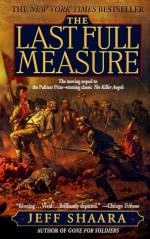 This detailed literature summary also contains Topics for Discussion and a Free Quiz on The Last Full Measure by Jeffrey Shaara.

Shortly after his defeat at Gettysburg, General Robert E. Lee of the Confederate army oversees the retreat across the Potomac River. The next battle involves Hill trying to attach Chamberlain's position at Bristoe Station, which ends in defeat for Hill because he was unaware of the Federal's strength.

Lincoln assigns General Ulysses S. Grant the supreme leadership of the Federal army. Grant begins his campaign to penetrate the South and force Lee's surrender. This leads to a long fight in the Wilderness, which turns out a draw. Lee rushes to Spotsylvania to set up defenses, thinking that Grant's objective is to take Richmond. The ensuing battle shows that Grant does not want Richmond but Petersburg, a major supply line center for Lee's army. Lee comes to the realization that he is Grant's objective and that Grant intends to destroy the Confederate army.

Through employing the defensive tactic of trench warfare, Lee holds back the Federals. However, Grant has reinforcements and a solid supply line. He eventually takes Petersburg and pushes the Confederates westward, but not without taking serious losses. In one attack, Grant loses about forty percent of his men, a serious mistake. Meanwhile Sherman has completed his march to the sea and moves north to cut off Lee's southern route.

Lee scrambles to draw forces together to stop Sherman, realizing that cutting off the southern retreat route would nearly box in the Confederate army. Failing this, Lee looks westward for supplies and demands better support from Richmond. The first critical shipment to Lee's army turns out to be ammunition, not the needed food. Eventually food arrives, but it comes too late.

Grant and Sherman meet to plan the endgame of the Civil War. Federal forces push Lee's army toward Appomattox. Grant cuts off Lee's supply line from the east and west, the only routes left. With his troops starving and surrounded, Lee surrenders at Appomattox.

Grant accepts Lee's surrender and gives generous conditions. The soldiers keep their horses because they must return to their farms, and it is the planting season. They must give up their arms. Chamberlain oversees the Federals and Gordon oversees the Confederates when this is done. Chamberlain orders the Federals to salute the Confederates, and Gordon returns the salute.

John Wilkes Booth assassinates Lincoln after Lee's surrender. Lincoln had wanted the reunification of the nation to proceed smoothly and with as little resentment as possible. The assassination may have led to Reconstruction period brutality.

In the aftermath of the war, Grant writes his memoirs, and the two-volume set becomes a best-seller that is published to this day. Lee tries to write his memoirs, but he feels that it can only do more damage to the South. Chamberlain attends the veteran reunions at Gettysburg until his death.