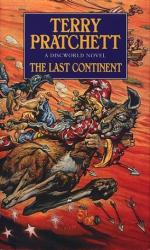 Terry Pratchett
This Study Guide consists of approximately 62 pages of chapter summaries, quotes, character analysis, themes, and more - everything you need to sharpen your knowledge of The Last Continent.

This detailed literature summary also contains Topics for Discussion and a Free Quiz on The Last Continent: A Discworld Novel by Terry Pratchett.

In a broad parody of Australian culture, Terry Pratchett's The Last Continent follows the hapless wizard Rincewind around Fourecks, fulfilling the quest assigned him by the Creator—to bring back The Wet—while his colleagues from Unseen University enter a time/space anomaly to search for him.

Marooned on parched, barren Fourecks at the close of the novel Interesting Times, hapless Rincewind the Wizzard manages to nourish himself in the waterholes into which he regularly stumbles. He assumes that he is just lucky, but is, in fact, being watched over by the local Creator through the efforts of The Trickster. The Creator wants Rincewind to return The Wet to the continent, ending a drought that is threatening all life. The Trickster comes and goes via primitive paintings on rock walls, most often appearing as Scrappy, a talking kangaroo, who says that the drawings are 30,000 old, yet had not existed the week before.

Meanwhile, Rincewind's colleagues at Unseen University (UU) need his knowledge of the Librarian's well-hidden name in order magically to cure his dangerous illness. The quarrelsome senior faculty, led by the obtuse Archchancellor Mustrum Ridcully, discover a window into the same time/space anomaly that holds Rincewind, to looking to recover him. They become stranded. It takes them first to Mono Island, where the local God of Evolution is hand-making creatures. When informed about sexual reproduction, he sets out to retool his operation. The wizards leave aboard a Melon Boat that forms overnight, but intense magic offshore Fourecks sinks the boat and maroons them. They observe its Creator drawing creatures on rock walls and marvel at how the images spring to life.

Rincewind has seen such drawings, including ones of pointy-headed men: wizards. He suffers many comic misadventures across the outback, which become the stuff of legend among people given to ballad-writing. He is nearly hanged for sheep-stealing but escapes with help from a troupe of of female impersonators—one of them actually female. In the course of his adventures, Rincewind invents or introduces to Ecksian culture many quintessential features, drawn from life in Australia, the model for Fourecks. In the end, Rincewind stumbles upon the key to reuniting past and present and ends the drought but nearly drowns the continent. Asked to remain, Rincewind sails home to the unexciting life of UU.

More summaries and resources for teaching or studying The Last Continent: A Discworld Novel.