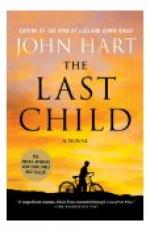 John Hart
This Study Guide consists of approximately 36 pages of chapter summaries, quotes, character analysis, themes, and more - everything you need to sharpen your knowledge of The Last Child.

This detailed literature summary also contains Topics for Discussion and a Free Quiz on The Last Child by John Hart.

This is a tightly-written multiple murder mystery that involves good and bad cops, physical as well as spiritual monsters and young men who try bravely to find their place in the adult world while avoiding its pains and pretenses. The author creates convincing action stemming from clear character traits and weaves a web of ever-deepening mystery until the last few pages when he performs the kind of authorial magic that produces sudden enlightenment——surely one of the reasons people read this genre of fiction. The descriptions of place and characters are very realistic and compelling, and almost before the reader is aware, the plot has ensnared him or her so they feel almost an actor in the drama unfolding in these pages. It is stimulating and satisfying to encounter an author with such a seemingly easy mastery of his craft.

Johnny Merrimon is a thirteen-year-old adolescent whose twin sister Alyssa has disappeared and is assumed abducted from the small town where they live in the hill country of North Carolina. His beloved father Spencer leaves his mother Katherine two weeks after the disappearance of their daughter. Katherine has become a pain pill popping agoraphobic whose solace is in drugs and alcohol. She takes up with a cocaine-snorting wealthy developer named Ken Holloway, who is physically and verbally abusive to Johnny. The young man has become a school-skipping delinquent who is cynical, distrustful of adults and obsessed with finding out what happened to his sister and, if possible, rescuing her. His partner is another frustrated boy named Jack, the son of Detective Cross and a co-worker of Detective Clyde Hunt. The two boys spend their days away from school tossing rocks through windows and roaming about like dispossessed souls.

Johnny witnesses at close hand a vicious murder in which a man is thrown from a bridge onto the river banks where he walks; the man starts to say he knows where "she" is but dies before he can finish his sentence. Johnny connects the dying man's words with his missing sister and goes on an intensive search.

More summaries and resources for teaching or studying The Last Child.