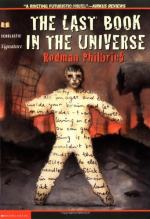 The Last Book In The Universe Summary & Study Guide

The Last Book In The Universe Summary & Study Guide Description

The Last Book In The Universe Summary & Study Guide includes comprehensive information and analysis to help you understand the book. This study guide contains the following sections:

This detailed literature summary also contains Quotes and a Free Quiz on The Last Book In The Universe by Rodman Philbrick.

In a post-Apocalptic future, everyone in the dangerous, greedy Urb uses probes to induce hallucinations that allow them to escape their problems--everyone except a teenage boy named Spaz, who has epilepsy which prevents him from using them. Spaz was raised by a foster family, but was forced on the streets when his parents feared his seizures would be contagious to his younger sister Bean. Now he works for a crime boss named Billy Bizmo and collects on his debts for him. In the process, he meets an old hermit named Ryter and discovers he's writing a book--the last known book in the universe. Spaz tells him that books are pointless since nobody reads them anymore, but Ryter argues that it's important to preserve ideas and memories for the future. Spaz is too busy surviving day by day to worry about the future.

Spaz receives word that his sister is dying and wants to see him. Though it's against the rules--and though he's been expressly forbidden by Billy Bizmo to go-- Spaz travels between the boundaries known as "latches," accompanied by Ryter and a little street urchin named Little Face who doesn't speak. Along the way, they encounter a girl named Lanaya, who is one of the proovs--or "improved genetic species"--who are thought to be smarter and better than normals like Spaz who live in the Urb. Lanaya is different from the other proovs, though, and offers to help them get to Bean.

Bean is nearly dead by the time they reach her and there seems to be little hope. Ryter diagnoses her with leukemia, an illness there used to be a treatment for but which they've lost over time. Lanaya offers to break the rules by taking Bean back to Eden, where the other proovs live and where advanced technology may be able to save Bean's life, even though it's forbidden for normals to go to Eden. Once there, Bean is healed, and Spaz discovers Lanaya is being raised to be a Master of Eden, one of the lawmakers. As Lanaya and her parents interact with the normals, they come to appreciate their intelligence and ability to survive and realize there is much they can learn from them. The other proovs disagree, however, and cast Spaz, Ryter, and Bean out, though Lanaya's parents adopt Little Face and keep him as their own.

Back in the Urb, Spaz and Bean are separated again and Spaz struggles to return to his old life now that he knows what being in Eden is like. Everything soon changes, however, when probes are banned in the Urb and the other normals come after Ryter, blaming him for the change. Spaz tries to save Ryter, and his book, but the mob kills Ryter and destroys the book. Before Ryter dies, he tells Spaz that he is now the last book in the universe. Spaz learns that his life was spared because his father is Billy Bizmo. Billy wants Spaz to follow in his footsteps, but Spaz decides to become a writer like Ryter. He receives a message from Lanaya telling him that today they may have lost, but the future will be theirs.

The Last Book In The Universe from BookRags. (c)2022 BookRags, Inc. All rights reserved.