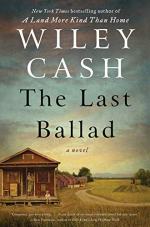 Wiley Cash
This Study Guide consists of approximately 60 pages of chapter summaries, quotes, character analysis, themes, and more - everything you need to sharpen your knowledge of The Last Ballad.

This detailed literature summary also contains Quotes and a Free Quiz on The Last Ballad by Wiley Cash.

The Last Ballad, by Wiley Cash, is based on a true story. Ella May Wiggins was born in 1900 and became an orphan when she was 16. She met John Wiggins as she was leaving her hometown, and they married a short time later, when she became pregnant with their first child. When their daughter Lilly is a toddler, Ella May and John arrive in Cowpens, North Carolina, and Ella May begins to work in a textile mill while John stays at home with Lilly and secretly brews moonshine. John soon attracts the attention of a man in town, Verchel Park. Verchel's wife, Myra, is part of a group of ladies who travel the county, trying to push their pious agendas onto everyone else. They arrive at the Wiggins house one day, and Myra catches Verchel with his pants literally around his ankles, having just had sex with one of the women who spends time at John's house. Within a short time, Myra's group forces the Wiggins family and Verchel out of town. Verchel becomes known only as “Brother” and takes up residence among a group of monks.

By 1929, Ella May has four surviving children – a fifth died as a toddler. Her family are the only whites in a black neighborhood called Stumptown. She he works 70 hours a week to earn nine dollars. John has left and Ella, only 28 years old, spends time with another man who talks about making a career out of music but who turns mean when Ella announces she is pregnant. When Ella learns that there is a union meeting in the nearby town of Gastonia, she decides to attend. During the trip, she meets Sophia Blevin and Fred Beal for the first time. Sophia is an eager young girl who has been involved in social issues her entire life, but she is somewhat naive. That evening, Ella takes the union stage for the first time and tells her story – the struggle of trying to feed her family and the fact that she spends almost every night away from her children, working at the mill. She also sings a ballad she wrote that becomes known as The Mill Mother's Song. Though she insists at the end of the evening that she has not yet made a decision of whether to join the union, she has become the face of the strike at Gastonia and soon accepts a job, helping to continue organizing.

While the strike has momentum, mill owners find ways to strike back. One mill owner evicts every union supporter from the mill-owned housing, forcing families to live in a tent city set up by the union. Sophia believes in the cause but does not fully understand the relationships between blacks and whites in the South. She believes the union has to be integrated, and she calls on her friend, Hampton Haywood. Hampton is from New York but has roots in Mississippi. He is a member of the Communist Party and supported the Brotherhood of Sleeping Car Porters until he felt that organization was not serving his best interests. Hampton arrives in North Carolina and helps drum up support for the textile union, but most people do not trust him. As a black man spending time with two white women – Sophia and Ella – and as a union supporter, Hampton finds himself unwelcome. When a confrontation between off-duty police officers and union officials erupts in gunfire, a police chief is dead and Hampton is soon running for his life.

In September of 1929, Ella is going for one final union meeting, and has promised her daughter Lilly that this will be her last. Two trucks are loaded with people supporting the union but armed opposition turn the trucks around and run them off a road. Ella and others scatter into the woods, and Ella finds herself in a cotton field. When someone calls out her name, she turns in time to see the sun glint off the rifle, and she dies of a gunshot wound in that field. Verchel has never gotten over his role in Ella being forced out of town, and he rushes to the scene when he learns that the union's opposition is targeting Ella. He arrives after she is already dead in the field.

Seventy-five years after these events, Ella's oldest daughter, Lilly, writes to her nephew about the events of that summer. She describes being sent to an orphanage, the public outpouring of grief that turned out to be staged for the media, and a meeting years later with Hampton, who cited Ella's courage.

More summaries and resources for teaching or studying The Last Ballad.