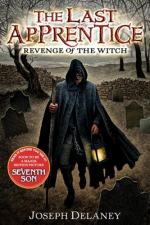 The Last Apprentice (Revenge of the Witch) Summary & Study Guide

Joseph Delaney
This Study Guide consists of approximately 30 pages of chapter summaries, quotes, character analysis, themes, and more - everything you need to sharpen your knowledge of The Last Apprentice (Revenge of the Witch).

The Last Apprentice (Revenge of the Witch) Summary & Study Guide includes comprehensive information and analysis to help you understand the book. This study guide contains the following sections:

This detailed literature summary also contains Quotes and a Free Quiz on The Last Apprentice (Revenge of the Witch) by Joseph Delaney.

The Last Apprentice: Revenge of the Witch is the first book in a series by Joseph Delaney. The novel opens with Tom, the narrator, telling that he is the seventh son of a seventh son. It’s hard for his family to find work for him because his family has used up their favors to get his older siblings jobs. Since work is scarce, Tom is going to become a spook. A spook is someone who fights against supernatural threats such as witches, ghosts, and other evil spirits. Spooks are feared by the community because of their dangerous profession. Tom is afraid that he’ll live a lonely life, but his mother reassures him, telling him that she married his father and had all of her other sons because she needed Tom to be the seventh son.

Tom and his mother share the ability of being able to communicate with the dead. When Tom meets the current spook, later identified as Gregory, he finds out that Gregory has this ability as well. Gregory explains how hard it is being a spook. The hours are long, and it involves a lot of travel. The long hours and travel are on top of the obvious difficulties associated with fighting malevolent spirits. Gregory takes Tom to the nearby town of Horshaw where he must spend the night alone in a haunted house.

Tom manages to stay the night in the house. Gregory reveals to him that this was his own childhood home. He talks about how in the past there was a couple that lived in the home. The husband got injured and couldn’t work, so his wife found a job without telling her husband. The husband believed that she was cheating on him, so he knocked her out and buried her alive in the cellar. Gregory could sense their spirits when he was a child. His father locked him in the cellar because he was tired of hearing him complain. This forced Gregory to face his fears.

With the first trial of spending the night in the house completed, Gregory takes Tom to his present home in Chipenden. He begins to teach Tom about hunting witches and evil spirits. Tom is introduced to the boggart that works inside of Gregory’s house and protects the area from any spirits. Gregory shows Tom that he has a witch imprisoned in the garden. The witch's name is Mother Malkin. Witches are very hard to kill, and many of the methods are inhumane. This limits how Gregory is able to deal with witches.

While traveling through the town, Tom meets a young girl named Alice. She helps save him from a group of bullies. Tom recognizes that she has the characteristics of a witch, but he doesn’t tell Gregory. He promises to help her in exchange for what she did to help him against the bullies. After a month, Gregory gives Tom the chance to leave. Tom initially accepts, but he changes his mind after talking to his mother.

When Tom returns, Gregory is out hunting a witch. Alice calls in her favor and has Tom deliver three cakes to Mother Malkin on behalf of her mother, another witch named Bony Lizzie. While in town, Tom figures out that there are several missing children from the town. Tom eventually figures that the children were baked into the cakes he was feeding Mother Malkin, which has enhanced her strength. He stops feeding her the cakes, but the damage is done. She is able to escape.

Tom chases her down and manages to kill her, using her weakness to running water. Even though her physical body is destroyed, Tom learns that the spirit of a strong witch can survive and possess someone else. Tom goes after Bony Lizzie knowing she has another child kidnapped. He doesn’t find the witch, but he does run into Alice. Alice protests, but Tom ignores her and rescues the child.

Alice later lures Tom into a trap where Bony Lizzie and her son, Tusk, bury him in a pit. They poison him as part of their ritual, but Tom manages to shake off the poison. He manages to convince Alice to save him, seeing the good in her. The two escape but are pursued by the witch. Fortunately, Gregory arrives and imprisons Bony Lizzie. He tells Tom to return home with Alice to see what his mother thinks of her.

Tom returns home where there is tension between him and his family. However, it seems that his mother is beginning to like Alice. Tom soon realizes that the spirit of Mother Malkin is on the farm. He wants to run away, but he changes his mind when he realizes that he is placing his family in danger. Alice convinces him that she’s not evil or working with the spirit. The local butcher ends up being the one who is possessed. Tom is able to drive the spirit away using the lessons he learned from Gregory. Gregory returns for him and leaves it up to Tom whether or not they imprison Alice or let her go to her aunt.

Tom wants to imprison her, but he changes his mind believing Alice could be turned to good. His mother and Gregory warn him that there’s a growing darkness and Tom will be needed to combat the rising evil. Tom intends to continue his training with Gregory, but he safely delivers Alice to her aunt first. Alice promises that they will meet again, something that Tom doesn’t doubt.

More summaries and resources for teaching or studying The Last Apprentice (Revenge of the Witch).

The Last Apprentice (Revenge of the Witch) from BookRags. (c)2022 BookRags, Inc. All rights reserved.