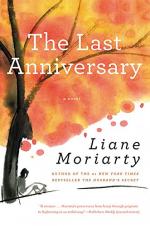 Liane Moriarty
This Study Guide consists of approximately 42 pages of chapter summaries, quotes, character analysis, themes, and more - everything you need to sharpen your knowledge of The Last Anniversary.

This detailed literature summary also contains Quotes and a Free Quiz on The Last Anniversary by Liane Moriarty.

"The Last Anniversary" is the story of a quirky family living on Scribbly Gum Island near Sydney, Australia. Two sisters, Connie and Rose Doughty, grew up there during the Great Depression. They became famous when they discover a baby at the home of couple Alice and Jack Munro who have mysteriously disappeared. The girls raise the baby and build a business based on the Munro baby mystery.

About 70 years later, Connie dies and leaves her island house to a 39-year-old woman named Sophie Honeywell. Sophie had been the girlfriend of their great nephew, Thomas Gordon. Sophie is taken in by this quirky family as she adapts to island life and struggles with the search for a husband. The Munro baby named Enigma is about 70-years-old now and she is still happy about her celebrity. Her children and grandchildren struggle with their own lives and their lack of knowing the secret of what happened to the Munros.

After Connie's death, the family holds the last anniversary of the Munro disappearance where the secret is revealed. Rose is relieved to finally let the others know that she is Enigma's mother; Jack and Alice Munro were made up characters to hide the fact of Rose's pregnancy due to a rape. Sophie has three men interested in her and she holds out hope that she'll finally get a husband and children which she thinks will complete her life.

The story jumps back and forth from the present to the past, always maintaining the present tense. There is an exception, however, when toward the end of the story Aunt Rose reveals the family's mysterious secrets as she tells hers and Connie's story in the past tense.

More summaries and resources for teaching or studying The Last Anniversary.