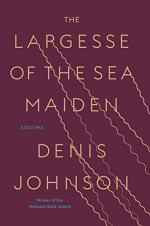 The Largesse of the Sea Maiden Summary & Study Guide

Denis Johnson
This Study Guide consists of approximately 75 pages of chapter summaries, quotes, character analysis, themes, and more - everything you need to sharpen your knowledge of The Largesse of the Sea Maiden.

The Largesse of the Sea Maiden Summary & Study Guide Description

The Largesse of the Sea Maiden Summary & Study Guide includes comprehensive information and analysis to help you understand the book. This study guide contains the following sections:

This detailed literature summary also contains Quotes and a Free Quiz on The Largesse of the Sea Maiden by Denis Johnson.

The following version of this book was used to create this study guide: Johnson, Dennis. The Largesse of the Sea Maiden. Random House, 2018.

The first story, "The Largesse of the Sea Maiden," follows the narrator, a man named Bill Whitman, a former ad man from New York now living in San Diego. He is living with his third wife as he writes brochures for golf resorts. Decades after leaving his old job in New York, Bill is invited to an awards ceremony to receive an award for work he did on a commercial in the 1980s. He agrees to attend the ceremony in spite of the fact that he will be the only member of his former team to do so, as all the others have moved on to bigger and better things.

Interspersed throughout this narrative are several shorter stories about Bill’s friends and the people he has met since moving to San Diego. These people include friends from his wife’s work as a volunteer teacher. One friend isTom Ellis, a journalist who plans to write a two-act play based on interviews he gathered for an article on the death penalty. Another friend is Tony Fido, an eccentric artist whose relationship with Bill is sporadic and short lived, ending abruptly by Tony’s suicide. When Bill goes to New York to receive the award he goes by himself and has a great time in his old city before flying back home to San Diego, where he returns to the monotony of his day-to-day life.

The "Starlight in Idaho" is a story about a man named Cass, a recovering alcoholic, who has just checked himself into a rehab facility in Northern California. The entire story is told through a long series of letters written by Cass. The letters are addressed to various members of his family, loved ones, and others, including the Pope and Satan. In these confessional letters, Cass reveals an abundance of information about his family’s struggles with addiction and predisposition to substance abuse, as well as the struggles of his past with alcoholism. He also details the side effects of the medication, Antabuse, which the doctors at the facility give him. The drug makes him sleepy and causes him to hallucinate. He thinks that he is being spoken to by Satan. It also gives him the delusion that he is the second coming of Christ. Once Cass is taken off the medication, he becomes much more lucid and grounded, turning to God and religion to provide him with hope and stability in his life as he seeks to cure himself of his addictions.

"Strangler Bob" is about an 18-year old boy who is sentenced to 41 days in the county jail for stealing and crashing a stranger’s car. The boy, who earns the name Dink from the other prisoners due to his relatively small stature, meets many different personalities during his short sentence, including the larger than life Jocko and his cellmate, Strangler Bob. Dink befriends two other prisoners around his age, Dundun and BD, and spends most of his time hanging out with them. One night, when the three of them are together and tripping on LSD, BD’s brother sneaks in for him, Strangler Bob, who murdered his wife, tells the boys one day they will all be murderers just like him. The prophecy has some truth, as each boy's jail sentence leaves him worse off than before his arrests. BD ends up hanging himself in a holding cell 15 years later, while Dundun kills a bodyguard during a robbery. Meanwhile, Dink becomes addicted to heroin, sharing infected needles with countless other addicts and killing who knows how many.

"Triumph Over the Grave" follows a writer as he tells the story of how he comes to enter a phase in his life where he finds himself tending to the sick and elderly, surrounded by death. The story begins when the narrator meets a writer named Darcy Miller at the University of Texas. While Darcy seems healthy at first, when he begins hallucinating visitations from his dead brother and sister-in-law, the narrator takes him to the hospital. Once there, they discover that Darcy's lung cancer, of which the narrator was unaware, has metastasized and spread to his brain.

The narrator parallels this story with another one years later in which he is taking care of an elderly man named Link, whose failing health requires that the narrator help him with daily tasks around the house, as well as taking him to and from hospital visits. The narrator describes being with Link on his deathbed, and during his final hours receiving a visit from his former wife, now an Alzheimer’s patient, who spends the last hour of Link’s life by his bedside. The narrator ends the story with a list of people he has known and who have died. The narrator claims that death does not matter for the world continues.

The narrative "Doppelganger, Poltergeist" follows a man named Kevin Harrington who looks back on his life, particularly his relationship with a poet named Marcus Ahearn, or Mark. Kevin meets Mark as a teacher teaching poetry at Columbia in the 1980s. Their relationship takes off straight away based on their shared passion for Elvis, particularly Mark’s. Mark’s older brother Lance, an Elvis enthusiast, died when Mark was very young. Since then, Mark has dedicated his life to carrying on his brother’s legacy by proving his theory that Elvis was murdered in 1957 and replaced by his allegedly stillborn twin brother, who later died in 1977.

Mark goes to great lengths to prove this theory as Kevin watches on over a period of decades. Eventually, in 2002, Mark digs up the grave of Elvis’s stillborn twin and finds a tiny corpse inside. This puts to rest his theory. Years later Kevin and Mark meet up again, and Mark says that Elvis this was just a phase that he confided in Kevin because he believes Kevin is the reincarnation of Lance’s own stillborn twin brother. However, in 2016, Kevin hears that Mark has been arrested in Memphis for attempting to defile the grave of Elvis, indicating that he can never let his obsession die.

More summaries and resources for teaching or studying The Largesse of the Sea Maiden.

The Largesse of the Sea Maiden from BookRags. (c)2022 BookRags, Inc. All rights reserved.