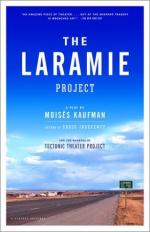 Sherry is the landlord of Russell Henderson, one of the men convicted of Matt Shepard's death. She found Russell to be "so sweet."

The Baptist Minister (who does not want his name used) believes that the Bible states that homosexuality is wrong.

Stephen is one of the members of Tectonic Theater Project who traveled to Laramie, conducted interviews, helped write the play, and portrayed himself, as well as several other characters in the play.

Dr. Cantway is an emergency-room doctor at Ivinson Memorial Hospital in Laramie. He helps try to save Matt Shepard's life. He describes Matt's injuries as looking as if he had been in an accident in a car going "eighty miles an hour."

Catherine is a professor at the University of Wyoming in Laramie and she considers herself to be the "first 'out' lesbian or gay...