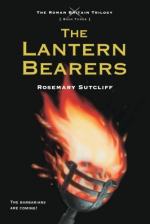 This detailed literature summary also contains Quotes and a Free Quiz on The Lantern Bearers by Rosemary Sutcliff.

“The Lantern Bearers” by Rosemary Sutcliff is the story of Aquila who is a Roman soldier assigned to the British Isles. He has adopted Britain as his home; his father and sister live nearby on a large farmstead. Aquila is proud to be a Roman soldier and is the commander of a cavalry division of the garrison assigned in the British Isles. He has close relationships with both his father and sister. Everything is perfect until things begin to change. The Roman army is being called back to Rome to defend the city. Aquila can't bring himself to leave his family and he feels he belongs to Britain. Aquila decides to desert the army and stay in Britain. It is the beginning of a long odyssey for Aquila to find where he belongs.

One dark night the family is attacked by barbarian Saxons. Although Aquila, Flavian and Flavia and their stewards and farmhands do their best to defend the homestead and stave off the Saxons, their defeat is a quick one. Flavian and his steward are slain, the house is set on fire and Flavia is kidnapped. Just as a huge Saxon is about to bring down a gleaming axe on Aquila's head, he hears the howling of wolves and has a better idea. Aquila is taken to the woods, stripped naked and tied to a tree. The Saxons will allow the wolves to take Aquila to a bloody and tortuous end. However, Aquila is saved when a group of Jutes find him in the forest. They decided to take him with them. He will become a slave and serve as an oarsmen on one of their large galleys.

Aquila returns with his captors to Juteland and lives there as a thrall for the next three years. In order to ensure that he does not escape, he is fitted with an iron collar that identifies him as a slave. He has the surprise of his life when he encounters his sister when the Jutes migrate to Britain for a better life. She has married the Saxon who kidnapped her and has a young child by him. Flavia gives him food and clothing and a rasp to be used to remove his collar so he can escape. He wants her to go with him but she cannot. She belongs to the Saxon. Aquila is hurt and disappointed but leaves her and her child behind.

In the woods, he encounters a kindly monk who helps remove his collar and gives food and shelter for a few nights. He tells the monk his dream is to find the true British king, Ambrosius, and help him reclaim the British crown from the murderous Vortigern who murdered King Constantine, Ambrosius's father, and seized the crown. The monk knows where Ambrosius is and encourages Aquila to seek him out and help the king return to power.

Aquila is able to find Ambrosius and vows his loyalty and support to him. Aquila feels he has found where he belongs. He becomes one of the king's most trusted followers and is made a member of his inner circle. During the years with Ambrosia, Aquila marries and has a son who he names Flavian in honor of his father and who Ness, Aquila's wife, calls Minnow. Aquila proves to be a valorous and fearless warrior and though there are defeats along the way, Ambrosius with Aquila at his side is able to defeat Vortigern and his forces, return to his rightful place on the throne and unite Britain as one country and one power.