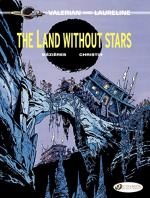 While traditional gender roles on Earth have changed over the decades, the people of this novel push the expectations to extremes. Some of those extremes resemble former times and places in human history.

When Valerian first arrives in Malka, he sees that the men are doing all the work. They are feeding children, working at the weaving loom, and doing laundry. Valerian wonders what qualifies as “women's work” in Malka (22). His comment indicates his sexist attitude about traditional gender roles but is also the first indication of societal norms in Malka.

When Laureline arrives in Valsennar, she notes that there are women working everywhere. She says that Valerian would approve of the situation. This is another indication of Valerian's attitudes related to traditional gender roles.

Another aspect of this theme is seen in the kind of work the men and women are doing. In Malka...

The Land Without Stars (Valerian) from BookRags. (c)2023 BookRags, Inc. All rights reserved.