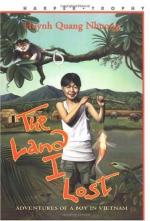 Plot Summary
+Chapters Summary and Analysis
Tank, the Water Buffalo, and My Cousin
The Lone Wild Hog, and Mister Short
River Creatures, and The Horse Snake
Opera, Karate, and Bandits, and So Close
Little Altar on the Roadside, and The Hero
The Monkey and the Old Lady, and What Can You Do with a Monkey?
The
Free Quiz
Characters
Objects/Places
Themes
Style
Quotes
Topics for Discussion
Order our The Land I Lost: Adventures of a Boy in Vietnam Study Guide

The Land I Lost: Adventures of a Boy in Vietnam Summary & Study Guide

Quang Nhuong Huynh
This Study Guide consists of approximately 25 pages of chapter summaries, quotes, character analysis, themes, and more - everything you need to sharpen your knowledge of The Land I Lost.

The Land I Lost: Adventures of a Boy in Vietnam Summary & Study Guide Description

The Land I Lost: Adventures of a Boy in Vietnam Summary & Study Guide includes comprehensive information and analysis to help you understand the book. This study guide contains the following sections:

This detailed literature summary also contains Topics for Discussion and a Free Quiz on The Land I Lost: Adventures of a Boy in Vietnam by Quang Nhuong Huynh.

The Land I Lost consists of Huynh Quang Nhuong's recollections of his boyhood in Vietnam in the 1950s. His family owned a rice farm in an agrarian hamlet. The book covers a couple of years in the very young life of Nhuong, including adventures with many wild and dangerous beasts.

Nhuong had two constant companions during his time at the rice farm. One of these was Tank, the water buffalo, so named because he hit other male buffaloes like a tank during fights over dominance. Tank combined the ferocity of the mountain buffaloes with the obedience and intelligence of the lowlands buffaloes. Nhuong would often ride on Tank's back during his excursions into the woods and around the farm. After Tank defeated a jungle tiger, he was retired from working the farm and tasked with the responsibility of protecting the hamlet's livestock from wild animals.

Nhuong's other companion was his cousin, who was raised by the family after Nhuong's aunt died in childbirth and uncle died from a wild hog attack. The cousin was about ten years older than the six-year-old Nhuong, and he had a natural attraction to hunting and the outdoors. The cousin was brave enough to tame a python and use it as a pillow, and he also became a town hero after he sliced another treacherous snake in the head, killing it.

Another constant in Nhuong's young life was his grandmother. Nhuong's grandmother was a feisty, lively soul. One tale has her handling an insulting "rascal" at a restaurant by using karate on him, and another tale has her stopping a bandit from robbing the family home by shooting him with an arrow in the leg. Nhuong's grandmother loved opera and plays, and she often staged traditional Chinese mythology plays in the hamlet, starring as the young heroine despite her age.

The threat of wild beasts was constant in the hamlet, and the community frequently rallied around the family to create hunting parties. In one incident, a lone wild hog killed a farmer and had to be slowly worn down by dogs (with significant dog casualties) before a team of hunters sliced its throat. The horse snake was also a terror, due to its speed and ferocity. Meanwhile, crocodiles made the waters hostile. One incident has a young boy named Hung cleverly cut off the tail of a crocodile intent on attacking boaters in the water. The stump-tailed crocodile was thereafter known as Mister Short.

Much time was spent by Nhuong and his cousin attempting to tame various beasts. They raised a breed of birds, and then had them drink opium-laced water in order to create an addiction that would have the birds come back every night instead of flying away. Monkeys were also used as pets and work animals by many families in the hamlet.

In the final chapter, beloved Tank was killed by a stray bullet from the Franco-Vietnamese war, signaling a loss of childhood and innocence.

More summaries and resources for teaching or studying The Land I Lost: Adventures of a Boy in Vietnam.

The Land I Lost: Adventures of a Boy in Vietnam from BookRags. (c)2022 BookRags, Inc. All rights reserved.