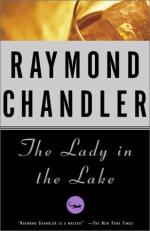 The Lady in the Lake Summary & Study Guide

Raymond Chandler
This Study Guide consists of approximately 40 pages of chapter summaries, quotes, character analysis, themes, and more - everything you need to sharpen your knowledge of The Lady in the Lake.

The Lady in the Lake Summary & Study Guide Description

The Lady in the Lake Summary & Study Guide includes comprehensive information and analysis to help you understand the book. This study guide contains the following sections:

This detailed literature summary also contains Topics for Discussion and a Free Quiz on The Lady in the Lake by Raymond Chandler.

The discovery of the body of a woman in Little Fawn Lake at first seems unrelated to Philip Marlowe's search for the wife of perfume tycoon Derace Kingsley. However, as the plot progresses in the novel The Lady in the Lake by Raymond Chandler, this gruesome discovery soon helps Marlowe to solve a chain of seemingly unrelated murders. Not only does Marlowe solve these murders, he also uncovers a dirty police officer and the woman the officer has been trying to protect.

Marlowe begins a seemingly uncomplex case in which he is hired by Kingsley to locate his wife Crystal who has been missing for one month. Kingsley had believed his wife had run away with her boyfriend, Chris Lavery. However, Kingsley had seen the boyfriend the day before. Lavery had seen Crystal in nearly a month as well. Marlowe first speaks to Lavery, then visits Little Fawn Lake, where the Kingsley's own a cabin. It is here that Marlowe and Bill Chess, who lives at the lake, discover the body of a woman who'd drowned in the lake. Chess identifies the dead woman as his wife Muriel. She, like Crystal, has been missing for one month.

Marlowe's investigation leads him back to Lavery, whom he discovers has been murdered, most likely by a woman. All indications point toward Crystal as the murderer. Crystal contacts her husband, needing money to get out of town because she is in trouble. Marlowe meets with Crystal to give her the money but insists that he talk to her first. As they are talking, Marlowe is knocked out. When he regains consciousness, he finds the girl he believes is Crystal Kingsley dead. In his attempt to get away from the scene without begin implicated in the murder, Marlowe is intercepted by police officer Al Degarmo. Marlowe deceives Degarmo into believing that Marlowe thinks Kingsley killed Crystal. The two travel to Kingsley's cabin on Little Fawn Lake, where Marlowe uncovers what he has really determined in his investigation.

Marlowe has determined the woman who drowned in Little Fawn Lake was actually Crystal Kingsley. Mildred Haviland, who had introduced herself to Bill Chess as being named Muriel, killed Crystal in an effort to leave her husband. Mildred was also responsible for the murder of Florence Almore, the wife of a doctor with whom she was having an affair. Officer Degarmo, who was also Mildred's ex-husband, covered up the murder to keep Mildred from going to jail. Mildred was also responsible for murdering Lavery because she was afraid Lavery might mention to Bill Chess that his wife was actually alive. Marlowe determines that Mildred was killed by Degarmo. In the conclusion of the novel, Degarmo is killed when he is shot by a sentry guard and his car crashes in Puma Point canyon.

More summaries and resources for teaching or studying The Lady in the Lake.

The Lady in the Lake from BookRags. (c)2022 BookRags, Inc. All rights reserved.