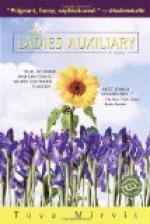 Tova Mirvis
This Study Guide consists of approximately 60 pages of chapter summaries, quotes, character analysis, themes, and more - everything you need to sharpen your knowledge of The Ladies Auxiliary.

This detailed literature summary also contains Topics for Discussion on The Ladies Auxiliary by Tova Mirvis.

An outsider brings awakening to a close-knit but closed-minded Jewish community in the novel The Ladies Auxiliary by Tova Mirvis. Batsheva Jacobs, an eclectic Jewish convert, becomes the object of gossip on the first day that she moves in the Memphis Jewish community. The ladies try to accept Batsheva because the Rabbi's wife seems to approve of her but their opinions change when the girls who Batsheva teaches become more rebellious. They blame the negative changes on Batsheva and try to force her from the community. Themes in the novel include hypocrisy in religion; the emptiness that can take over religious rituals; and the danger of judging a person by their appearance alone.

Before they have even met Batsheva, who moves into their community late one Friday, the Jewish women of Memphis have already decided that they do not like her. She dresses differently from them; she has converted to Judaism instead of being born into it; she sings too loudly at the shul; and her daughter does not act like their children do. Because the Rabbi's wife, Mimi does like Batsheva, the others try to like her as well. They find her enthusiasm for the rituals of their religion, which have grown old and tired to them, refreshing. They are even impressed that Mimi allows her only son, Yosef, to study with Batsheva.

It is when the already troubled youth of the Jewish community begin to rebel in earnest that the ladies once again turn against Batsheva. They blame her for the changes that they see in their children without realizing that it is their own hypocritical ways that create the rebellion. The situation comes to a head when one teen girl runs away from home. Batsheva is voted out of her teaching job, a move that the ladies hope will make her leave Memphis.

When the Rabbi's son leaves town because he has discovered that he doubts his own religion and is not sure if he even want to be associated with the Jews anymore, the women of the town are shocked, saddened, and hurt. They assume Yosef leaving is also because of Batsheva. Even the normally open-minded Mimi allows herself to be swayed by the women's gossip about what might have gone on between Batsheva and her son. The issue between Batsheva and Mimi is cleared up when the two meet one another as they each go to the shul to seek solace for their own personal hurts. Although the other women of the town never fully seem to understand what has transpired, they seem to see in a small way through their experience with Batsheva, the hurt and devastation that their own actions and talk can bring to an entire town.

More summaries and resources for teaching or studying The Ladies Auxiliary.

The Ladies Auxiliary from Gale. ©2005-2006 Thomson Gale, a part of the Thomson Corporation. All rights reserved.