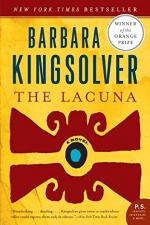 Barbara Kingsolver
This Study Guide consists of approximately 48 pages of chapter summaries, quotes, character analysis, themes, and more - everything you need to sharpen your knowledge of The Lacuna.

The Lacuna Summary & Study Guide includes comprehensive information and analysis to help you understand the book. This study guide contains the following sections:

This detailed literature summary also contains Quotes and a Free Quiz on The Lacuna by Barbara Kingsolver.

The following version of this book was used to create this study guide: Kingsolver, Barbara. The Lacuna. London: Faber & Faber, 2009. Kindle AZW file.

The Lacuna tells the life story of Harrison Shepherd, a man born in the United States but raised in Mexico. Harry’s literary career in the United States during the late 1940s was destroyed because of his past experiences working closely with influential Communists in Mexico including Frida Kahlo, Diego Rivera, and Leon Trotsky.

Part 1 covers the years 1929 – 1931, during which Harry was a child growing up in Mexico with his mother Salome who had left his father in Washington DC to be with a Mexican businessman named Enrique. An archivist informs the reader that the opening section was written as the first chapter of a memoir by Harrison Shepherd but that he never finished writing it. Instead, the reader learns his life story through a series of diaries and correspondence.

The story continued on Isla Pixol where Harry discovered an underwater cave known as a lacuna. After studying the tides, Harry discovered the ideal time to swim through the cave and discover what was on the other side: ruins from the Aztec empire. Harry’s mother decided to leave Enrique and move to Mexico City with Harry, who found work as a plaster mixer for the painter Diego Rivera. At the end of Part 1, Harry’s mother sent him back to the United States to live with his father.

Part 2 covered the years 1932 – 1934, which Harry spent in Washington DC. Harry attended a military school called Potomac Academy where he developed a close friendship with another student Billy Boorzai, nicknamed Bull’s Eye. Harry became more aware of his homosexuality through his attraction to Bull’s Eye. Part 2 ended with a note from the archivist who reveals to the reader that Harry did not want his diaries to be published and had requested that they all be destroyed. Although most of the diaries survived despite Harry’s wishes, the next in the series was burned by the archivist under Harry’s instructions.

Part 3 covered the years 1935 – 1941 and took place in Mexico. Harry was expelled from Potomac Academy but the events that caused this are not revealed to the reader as they were covered in the diary that was burned. Harry was working once again for Diego Rivera and his wife Frida Kahlo. Harry developed a close friendship with Frida during these years. The Russian revolutionary Leon Trotsky was granted political asylum in Mexico and came to live with the Riveras. After the discovery of Harry’s ability to type and speak two languages, he became one of Trotsky’s secretaries. In his free time, Harry wrote a novel set in ancient Mexico.

This period in Harry’s life came to the end after Trotsky was assassinated by agents of Joseph Stalin, the Russian dictator. Harry’s diaries and his novel were confiscated by the Mexican police and he believed they were lost forever. Frida sent Harry to the United States to deliver some of her artwork to New York because she was concerned that his extensive written records would put him under the suspicion of the Mexican authorities in relation to Trotsky’s death.

Part 4 took place in Asheville, North Carolina during the years 1941 – 1947. At the start of Part 4, the archivist reveals her identity. She is Violet Brown, friend and former secretary to Harrison Shepherd during his adult years in the United States. After losing all of his writing in Mexico, Harry stopped keeping such detailed records, so Violet takes over his life story at this point. Harry settled in Asheville after leaving Mexico and took up a job teaching Spanish at the local college. During World War Two, as a result of his experience working for Frida Kahlo, he was hired by the government to move valuable artworks to safer locations. After a long delay, Harry opened a crate given to him by Frida when he left Mexico and discovered that it contained all of his diaries and his novel. Harry began keeping diaries again after the old ones were found. Harry published his first novel “Vassals of Majesty” to great acclaim and he became a well-known writer. Unable to cope with the attention brought about by his success, Harry hired Violet Brown to be his secretary. Violet joined Harry on a trip to Mexico to do research for a new novel.

Part 5 continues in Asheville, North Carolina during the years 1948 – 1950. After WW2, the United States government attempted to prevent anyone with a connection to Communism from having influence in the country. As a result of most of Harry's time spent amongst Communists in Mexico, as well as the contents of his novels which were said to be “un-American,” Harry was called to testify to the House Un-American Activities Committee. Harry received a lot of hate mail and his next novel was a failure. He was warned that criminal proceedings were likely to follow, so he hatched a plan to return to Isla Pixol where he had lived as a child. Once there, he faked his own death by swimming through the lacuna and convincing the locals that he had drowned. Years later, Violet Brown published his diaries so that the truth about his life and work could finally be known.

More summaries and resources for teaching or studying The Lacuna.

The Lacuna from BookRags. (c)2022 BookRags, Inc. All rights reserved.