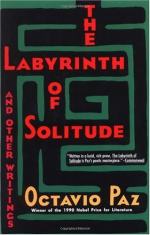 Plot Summary
+Chapters Summary and Analysis
Chapter I The Pachuco and Other Extremes
Chapter 2 Mexican Masks
The Day of the Dead
Chapter 4 The Sons of La Malinche
Chapter 5 The Conquest of Colonialism
Chapter 6 From Independence to the Revolution
Chapter 7
Chapter 8
Chapter 9
Free Quiz
Characters
Objects/Places
Themes
Style
Quotes
Topics for Discussion
Order our The Labyrinth of Solitude: Life and Thought in Mexico Study Guide

The Labyrinth of Solitude: Life and Thought in Mexico Summary & Study Guide

Octavio Paz
This Study Guide consists of approximately 29 pages of chapter summaries, quotes, character analysis, themes, and more - everything you need to sharpen your knowledge of The Labyrinth of Solitude.

The Labyrinth of Solitude: Life and Thought in Mexico Summary & Study Guide Description

The Labyrinth of Solitude: Life and Thought in Mexico Summary & Study Guide includes comprehensive information and analysis to help you understand the book. This study guide contains the following sections:

This detailed literature summary also contains Topics for Discussion and a Free Quiz on The Labyrinth of Solitude: Life and Thought in Mexico by Octavio Paz.

Nations experience transformation in the same way that individuals mature. We all tend to perceive ourselves as unique until we begin to question our existence and come to the realization that one faces the world alone. Nations search for their identity and their existence in relation to other nations.

The Mexican character is unique. It is best examined in the United States because it fostered certain symbolic expressions that can be best identified when compared with other groups and nationalities. There are no group or nationality like Mexicans who are neither Indians, nor Black people nor Americans. Through their rebellious nature they display their apparent disinclination to adapt. They exhibit a sense of restlessness, tendency to exaggerate, ridicule, and form gangs. They seek solitude when they become detached from their roots. They are drawn towards self-destruction, persecution, and redemption. In this way they can be more noticeable.

In Mexico they hide behind formalism, closed forms, modesty, and values. They see women through in their own way to realize their own desires. Hence women are best suited when passive because mobility can make them dangerous. In the conquest of love they escape under the disguise of the mask they create that forges a certain pose. Through nihilism they deny their existence but also the existence of those who oppress them.

Fiestas are a way to escape, but it is also the only time when Mexicans open up, engaging in joy and violence. They are to attract life and health but chaos pervades, uniting through formlessness when everything seems to merge. Fiestas allow for the rejection of impediments and individualities. Fiestas can celebrate death viewed according to Aztec beliefs as a transition in a cyclical stages of life. Mexicans celebrate death that, like life, has no meaning for them.

Mexicans are connected with their past. They work in a different way as they want to be engaged in each element of production. They are shaped by the colonial period in a society divided into those who inflict suffering and those who suffer. Personal strength that is part of personalities and wealth is still influential. Violations from the colonial period are still present in seeing foreign influences as dangerous, as it occurred with Dona Malinche who was seduced and abandoned by Cortes. Both Spanish and Indian traditions are denied. Breaking up with Indian and Spanish identity leads to nihilism. In this way, both the oppressed and the oppressor cease to exist.

Ancient beliefs and customs that have been retained are part of the Aztec civilization that integrated other cultures in the same way that Greeks absorbed cultures during the Hellenic period. Older cultures became liberated with the arrival of the Spanish conquerors when they forged alliances with them. It led to the division of the Aztec society and their surrender. The quick conquest brought cultural gains but also the quest for power and feudalism. The colonial period, despite its horrors, allowed for participation of all. It had to end as it stifled commerce, personal expression, and adventure.

To progress, Mexico had to free itself from Spanish ties. The revolution that was to achieve this lacked meaning and ideas. Mexico separated from Spain without its own transformation while retaining some old static societies. Agrarian revolution was achieved, and slavery became abolished. Some progress was achieved under the dictatorship of Porfirio Diaz, but not as the result of industrialism. The Revolution failed to be fully realized as some conservatism remained along with the lack of vision. It allowed, however, for the national recognition.

Philosophers and intellectuals tried to examine the Revolution. They failed to use analysis and judgement despite their broader significance in Mexico as compared to Europe or the United States. They examined the true Mexican nature, the Diaz regime, and formulated what makes a good writing. Overall, the Revolution allowed for self-discovery realizing that Mexico despite its isolation needs to participate in the universal history.

Despite the Revolutionary achievements some parts of society continue to suffer poverty. There is insufficient economic progress, and corruption. Neither socialism nor capitalism provided all answers to Mexican problems; Mexico needs to resolve them on its own without the inhibitions of pretense.

Solitude and love face similar challenges in modern society that opposes love through morals, laws, classes, or races. Both men and women face inhibitions in their choices through social constraints. Solitude is considered to be a punishment, but ancient societies regarded it as purification and preparation for the next stage of life. The labyrinth symbolizes solitary journey in search of answers to restore health and meaning. Our search for meaning can be obscured by rationality that can create horrors. Reason can inhibit our vision.

More summaries and resources for teaching or studying The Labyrinth of Solitude: Life and Thought in Mexico.

The Labyrinth of Solitude: Life and Thought in Mexico from BookRags. (c)2022 BookRags, Inc. All rights reserved.