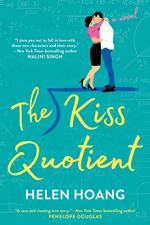 This detailed literature summary also contains Quotes and a Free Quiz on The Kiss Quotient by Helen Hoang.

The following version of this book was used to create the guide: Hoang, Helen. The Kiss Quotient. Penguin Publishing, 2018.

The third- person omniscient narrator introduces us to 30 year old Stella Lane, a wealthy and successful econometrist living in Palo Alto who has been diagnosed with Asperger’s syndrome. While at lunch with her parents, Stella’s mother pressures her to find a husband. At her office, the colleague her mother suggests she date, Philip James, tells her that it is important for her to be good at sex in order to get a boyfriend. Stella looks online for an escort, believing they could teach her about how to be good at sex.

Stella hires Michael, a handsome 28 year old who resembles a Korean movie star. Michael escorts on Friday nights to help pay for his mother’s medical bills. Stella proposes that she be his only client for a few months so he can teach her some skills. In her hotel room, she enjoys kissing Michael but freezes when he tries to go further. The next morning Michael tells her he cannot see her again as he does not take repeat clients. Finding her very attractive, he relents and says he will give her three more sessions. Their second session goes much like the first, with Stella freezing up when it gets to intimate. Michael tells her that he wants to take her dancing for their next session, believing this will loosen her up.

At the club, Michael runs into an ex-client and she forcibly kisses him and offers him money to be with her. Stella sees them kiss and runs outside, overwhelmed by the noise and the crowd. Michael’s cousin, Quan, follows her and recognizes the signs of autism due to his brother being autistic. Stella confirms his suspicions but he does not tell Michael. Michael drives Stella home and she proposes a new plan, asking him to be her pretend boyfriend instead so she can practice being in a relationship. He agrees to her plan when she accidentally bumps into him at his work, a dry cleaner/ tailor shop run by his mother. Stella recognizes that Michael is a talented designer and wonders why he is not designing full time. Michael’s mother invites Stella over for dinner.

At dinner, Stella is overwhelmed by the noise in the house. She insults Michael’s mother by not eating the food due to the BPA plastic she serves it in. She asks about Michael’s father and his mother tells her that he ran off and goes to her room to cry. Stella leaves, apologizing. Michael decides he needs to break it off with her, knowing it is wrong to accept her money, believing that this makes him like his father. The next day, Stella brings chocolate to the dry cleaners to apologize o Michael’s mother. Michael talks to Quan and realizes Stella is autistic. He decides to keep the relationship going, wanting to be near her.

Michael and Stella fall for each other and Stella is able to relax and start enjoying sex. Both worry what they mean to each other. Stella invites Michael to her mother’s charity event and asks him to make a dress for her. Before the event, Philip asks her to go with him and forcibly kisses her. She tells Michael and he is angered even though he knows he has no right to be.

At the event, Michael is ill at ease as it is obvious Stella’s dad is judging him. He is annoyed by Philip and saddened by the intellectual connection that he has with Stella. Michael’s ex-client from the club arrives turning out to be Philip’s mother. Michael breaks up with Stella believing he is not good enough for her.

Both Stella and Michael are miserable apart. Stella asks Philip to dinner to try and move on. After their date he tries to kiss her and she turns away. Michael sees this from the other side of the street and punches Philip. Michael realizes that Stella does love him and he sends her flowers and asks her to dinner. When she rejects the offer he approaches her outside he office and tells her he loves her. They get back together and Michael tells her he is going to propose in three months.

Four months later they are engaged and Michael’s new fashion line is doing well. Stella has accepted a promotion at work which will mean more contact with people. Stella tells Michael she wants to buy him a car and he tells her he will accept it because he loves her.