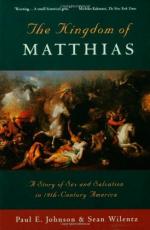 Paul E. Johnson
This Study Guide consists of approximately 27 pages of chapter summaries, quotes, character analysis, themes, and more - everything you need to sharpen your knowledge of The Kingdom of Matthias.

The Kingdom of Matthias Summary & Study Guide includes comprehensive information and analysis to help you understand the book. This study guide contains the following sections:

This detailed literature summary also contains Topics for Discussion and a Free Quiz on The Kingdom of Matthias by Paul E. Johnson.

The Kingdom of Matthias tells the story of Robert Matthews, who later took on the name Matthias the Prophet. A religious charlatan in 1830s New York, Matthews established a "Kingdom" of fanatical followers, causing a nationwide scandal.

Matthews' most fervent follower was Elijah Pierson, who was born into a strict Calvinist church upbringing but who quickly got swept up in the evangelical, "perfectionist" movement upon his move to New York as a merchant. Elijah married a missionary woman named Sarah, and together they established a "Retrenchment Society" and other organizations designed to spread the word of God.

In her fervor, Sarah literally worked herself to death, and died in 1830. The event spurred Elijah toward madness as he attempted to raise Sarah from the dead during funeral. Elijah started to hear God speak and he adopted the title Prophet Elijah of Tishbe.

Simultaneous to these events, Robert Matthews was born and raised in a Scottish community called Coila. His parents died when he was young, and after several of his sons tragically died, Matthews began to hear God and see prophetic visions. He adopted the name Matthias.

In May 1832, Matthews visited Pierson, and Pierson became convinced that Matthews was God's Prophet. Matthews used Pierson's merchant wealth to establish "The Kingdom." Matthews preached regularly to a small band of followers. Eventually, he came to regard Christianity as the Devil's work, and his philosophy was full of anti-woman hatred. Matthews convinced a wealthy couple, Benjamin and Ann Folger, of his prophethood, and soon he established a community at the Folger home in Sing Sing, which he called "Mount Zion." Matthews ruled his community with an iron fist, dressing extravagantly, bearing an unkempt beard, punishing severely, and lecturing frequently.

Not content with the Christian conception of marriage, several of Matthews' followers forsake marriage to be united in the "Spirit of Truth." This caused a good deal of scandalous "wife-swapping", as it might be called today. Matthews and Ann fell for each other, and Matthews proclaimed Ann as the "Mother" of the kingdom. Benjamin strayed to Matthews' twenty-year-old daughter Isabella, as well as to a widow named Catherine Galloway. The sexual intrigue proved too much for the community, and Benjamin and then Ann revolt. Additionally, an increasing public outcry against the Kingdom and its scandals assisted in its dissolution.

One day, Elijah Pierson, suffering from seizures, ate blackberries and soon after died. The public rumor was that Matthews, along with his servant Isabella Van Wagenen, had poisoned the man. Matthews was arrested and tried with murder after two doctors conducted an autopsy and claimed there was poison in Pierson's stomach. However, the prosecution had only a flimsy case, and the jury found Matthews not guilty of murder, but guilty of assault (for beating his daughter), and so Matthews served four months in prison.

The Kingdom of Matthias scandal is noteworthy for sparking the "penny press" newspapers, with their obsession with crime and scandal, a tradition that continues to this day with such periodicals as National Enquirer.

More summaries and resources for teaching or studying The Kingdom of Matthias.

The Kingdom of Matthias from BookRags. (c)2022 BookRags, Inc. All rights reserved.