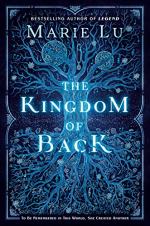 Plot Summary
+Chapters Summary and Analysis
Introduction; Mozart by the Ocean; The Walking Dream
The Boy from Another World; The Princeling in the Grotto; The Road to Vienna
The Secret Page; The Princeling in the Palace; The Night Flower
The Castle on the Hill; A Family of Dignified Reputation
The Ogre and the Sword; The Boy in Frankfurt; Who Directs the Orchestra?
The Arrow; The Chateau; A Dream Not Lived
Hyacinth's Revenge; The Agreement; The Princess in the Tower
Letters from a Midnight Wood; The Ghost on the Parchment; The Return to Vienna
The Devil's Dance; The Harbinger of Death; The Chosen Path
The Queen of the Night; The Return of the Queen; The end of the Beginning; Twenty-three Years Later: Sankt Gilgren, Austria: 1792
Free Quiz
Characters
Symbols and Symbolism
Settings
Themes and Motifs
Styles
Quotes
Order our The Kingdom of Back Study Guide

The Kingdom of Back Summary & Study Guide

Marie Lu
This Study Guide consists of approximately 62 pages of chapter summaries, quotes, character analysis, themes, and more - everything you need to sharpen your knowledge of The Kingdom of Back.

The Kingdom of Back Summary & Study Guide Description

The Kingdom of Back Summary & Study Guide includes comprehensive information and analysis to help you understand the book. This study guide contains the following sections:

This detailed literature summary also contains Quotes and a Free Quiz on The Kingdom of Back by Marie Lu.

The following version of the book was used to create this study guide: Lu, Xiwei. The Kingdom of Back. Penguin Random House, New York, NY, 2020. Kindle AZW file.

Nannerl Mozart is eight years old when her younger brother, Woferl, begins to learn music. From the beginning, it is clear that Woferl has a natural talent. The children are almost always together and their father, Leopold, teaches them music while their mother, Anna, takes care of them. Their father is the vice-kapellmeister of the Salzburg court. Music dictates almost every moment of their lives.

Though Leopold does not approve, Anna sometimes indulges the children with folk tales. In their many hours together, Nannerl and Woferl begin to weave an elaborate story of the Kingdom of Back, a magical place where many things are backwards. They are soon caught in the quest of a faery named Hyacinth who needs their help to return to his rightful place in the castle. Initially, they believe he is the displaced princeling and set out to help him. Over time, however, Nannerl comes to realize that Hyacinth is not a good faery but an evil creature set on even more destruction, though he hides his plans behind a promise that he will help Nannerl achieve her own dream.

Nannerl fears being forgotten. Though she is as talented at playing and composing as Woferl, it is acceptable for her to perform for audiences only while she is a child prodigy. It is never acceptable for a female to compose music of her own. With Woferl urging her on, Nannerl begins to secretly compose when Leopold is away. She hides her work away, knowing no one can ever see it and that it will never be performed for an audience. Leopold sets out on a tour with the children, performing for royalty in Vienna and across several settings in Europe. Nannerl sometimes visits with Hyacinth during this time, and she and Woferl share tales of what happens in the Kingdom of Back. Over time, Nannerl and Woferl become known as the Mozart children and share the spotlight at various performances. After the siblings have an argument, Woferl begins to hog the attention for himself. When a prince demands a bound volume of Woferl's work, Nannerl is horrified to find Leopold has found her compositions and included them under Woferl's name. Later, the archbishop of Salzburg demands a composition from Woferl. Nannerl is pushed to help him compose it. Leopold makes no offer to acknowledge Nannerl's contribution. However, this time Woferl signs the work merely as “Mozart,” the only way he can share the credit with Nannerl.

Meanwhile, Nannerl and Woferl continue to share tales of the Kingdom of Back and to visit. Nannerl and Woferl take a flower from the underwater cave. Nannerl then retrieves a magic sword and a golden crossbow and uses the items to help Hyacinth reach the castle. When there are overlaps into reality, Nannerl realizes Hyacinth means to take Woferl from the real world so that Nannerl will no longer have to share the spotlight. She then realizes Hyacinth means to keep them both. She sets out to make that situation right, restores the queen to her rightful place, and they destroy Hyacinth.

Years pass. Nannerl becomes a wife and mother, which is expected of her as a woman during this time. Woferl becomes a famous musician and composer. After his death, Nannerl reunites with an old family friend and they reminisce about Woferl. Nannerl discovers Woferl left her a small gift that reminds her of the Kingdom of Back, and she sets out to tell her daughter the story.

More summaries and resources for teaching or studying The Kingdom of Back.

The Kingdom of Back from BookRags. (c)2022 BookRags, Inc. All rights reserved.