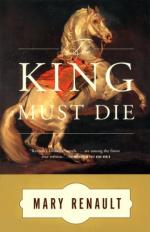 The King Must Die Summary & Study Guide includes comprehensive information and analysis to help you understand the book. This study guide contains the following sections:

This detailed literature summary also contains Topics for Discussion and a Free Quiz on The King Must Die by Mary Renault.

"The King Must Die", written by Mary Renault, is a story based on the early life of Theseus. It is told by Theseus as an old man remembering his early life as the grandson of a king, his search to find his father, his captivity in Crete, and through his inner strength and leadership his return home.

Theseus begins the story with his childhood and the beliefs that had been handed down to him by his mother and grandfather. Theseus had thought himself to be the god begotten son of Poseidon. His mother and grandfather told him this for many years. Theseus didn't grown tall like other god begotten sons were said to grow. He pushed himself and challenged everyone around him to prove that he was worthy of Poseidon.

Theseus leaves his home and his mother to find his father. Along the way he is stopped in a kingdom called Eleusis. Here he is made to fight the current king, part of a yearly ritual, and becomes the new king in the process. He is trapped as the king, and will be forced to die in one years time but he is slowly able to change the beliefs in the city and saves his own life. His queen, Persephone, becomes angry and tries to have him killed by her brother and then by Theseus' own father, unknowingly, with poisoned wine.

Theseus is able to gain control of the kingdom and Persephone flees. Theseus and his father spend a little time together between the two kingdoms when they are visited by the Creates who have come for their yearly tribute. They take several young members of the city. Theseus is unwilling to let his men go as slaves and volunteers himself. Once in Crete they are made to be bull dancers. This is to appease the gods who either enjoy a well done show or receive a sacrifice when one of the youths are killed by the bull. Theseus falls in love with the kings daughter, Ariadne. When the Create king dies there is an earthquake and a rebellion. Theseus takes Ariadne and the other bull dancers on a boat away from Crete. When they get to the island of Naxos Ariadne takes part in a sacrifice and is covered in blood. Theseus is unable to hide the way he feels about the sacrifice and leaves Ariadne there on Naxos and returns home.

When Theseus' ship nears his home he doesn't run up the white flag as his father asked. The king sees the ship but no white flag and knows that his son is dead. He jumps to his own death before the ship can make it into port. Theseus knows that every man is in the hands of the gods and the gods had a plan.

The King Must Die from BookRags. (c)2022 BookRags, Inc. All rights reserved.