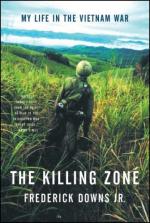 The Killing Zone: My Life in the Vietnam War Summary & Study Guide

Frederick Downs
This Study Guide consists of approximately 29 pages of chapter summaries, quotes, character analysis, themes, and more - everything you need to sharpen your knowledge of The Killing Zone.

The Killing Zone: My Life in the Vietnam War Summary & Study Guide Description

The Killing Zone: My Life in the Vietnam War Summary & Study Guide includes comprehensive information and analysis to help you understand the book. This study guide contains the following sections:

This detailed literature summary also contains Topics for Discussion on The Killing Zone: My Life in the Vietnam War by Frederick Downs.

The author, Lt. Frederick Downs is surprised that the lights are blazing at the airfield when he arrives in Vietnam, on September 8th, 1967. It does not look like an airfield in the middle of a war zone. Still, there is a foreboding notion that there is a war out there, and men will die, be wounded and be crippled. The author, Lt. Frederick Downs, is a Lieutenant, fresh out of OCS, Officer Candidate School. Lt. Downs learns he is going to the 4th Division, based in Pleiku, in the Central Highlands of South Vietnam, and hears that there is plenty of fighting there. The truck driver who is transporting the Lieutenant, tells him about Pleiku. There are many Vietnamese working there, who are called "gooks" by the American soldiers. After 4 days, Lt. Downs is flown on a C-130 plane to Duc Pho, the headquarters of the 3rd Brigade of the 4th Division. His base camp is on a hill called Montezuma Mountain. Lt. Downs is brought in as an observer to some jungle fighting. His first command post is commanding the 1st Platoon to defend three bridges on Highway 1, the Coastal Highway. Lt. Downs leads a number of actions and patrols. Often friendly fire and triggered U.S. mines are as deadly as enemy fire. Lt. Downs learns the ropes of leading a unit and depends on key men like his radioman, RTO Mann, and Acting Sergeant Schaldenbrand. Often, the area is deceptively peaceful and can fool men. An Engineering Battalion goes through and refuses to stop at night on the road. The next day, a truck and men are blown up by mines.

Next, Lt. Downs and his unit are moved to the interior jungle. The battalion sets up Firebase Tempest on a mountaintop, and Lt. Downs' unit is sent out into the surrounding jungle. Here there is more fighting, as a large Vietcong force is concealed in the jungle. After an ambush, Lt. Downs captures two mortars in a battle. Soon after, his unit is ambushed and he is nearly killed but survives intact. After a couple of months in the jungle, the battalion dismantles the firebase and moves on. This frustrates Lt. Downs, who does not understand the reason for all this movement. He also doubts the ability of the ARVN, the South Vietnamese, to do anything for their own defense. For a short time, the platoon is moved back to defend a bridge near the first bridge that Downs defended. More ARVN forces are seen by Lt. Downs to be hostile, worthless and improperly trained.

After, the platoon is moved further north along the coast, in Tam Ky province. This area is closer to North Vietnam and is largely controlled by the Vietcong. Lt. Downs' platoon lands by helicopter and is immediately attacked by snipers. The area is declared by the US Army as a free-fire zone, meaning that all people not US Army, ARVN or other friendly forces, can be killed. The area is honeycombed with tunnels and bunkers and has many mines and booby-traps planted. Lt. Downs is under fire and often in danger of death. Finally, he steps on a "Bouncing Betty" land-mine and is seriously wounded. He loses his left arm, but his life is saved.

More summaries and resources for teaching or studying The Killing Zone: My Life in the Vietnam War.

The Killing Zone: My Life in the Vietnam War from BookRags. (c)2022 BookRags, Inc. All rights reserved.