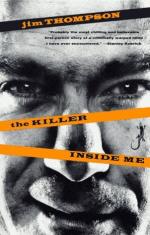 The Killer Inside Me Summary & Study Guide

James Thompson
This Study Guide consists of approximately 34 pages of chapter summaries, quotes, character analysis, themes, and more - everything you need to sharpen your knowledge of The Killer Inside Me.

The Killer Inside Me Summary & Study Guide Description

The Killer Inside Me Summary & Study Guide includes comprehensive information and analysis to help you understand the book. This study guide contains the following sections:

This detailed literature summary also contains Topics for Discussion and a Free Quiz on The Killer Inside Me by James Thompson.

Lou Ford first sets eyes on a bum outside the local diner. A deputy, Lou says that he does not believe in force and does not carry a gun or even a nightstick. When the bum sizes Lou up as an easy mark, Lou crushes out a cigar in the man's hand, sending him scurrying out of town. When Lou is later sent to confront a prostitute, he is given the discretion by his superior, Sheriff Bob Maples, whether to run the woman out of town or to simply tell her to stop her trade. When Lou arrives, the woman—Joyce Lakeland—mistakes him for a customer and sends him to the bedroom. There, he finds a gun and when she returns, shows his badge which prompts her to lash out at him. He brutally beats her and at the end of the beating they have sex. This begins a relationship between the two that lasts for some time and includes brutal encounters similar to the first. Meanwhile, Lou is involved with a young woman named Amy Stanton and it is generally accepted that the two will someday marry. Amy is growing impatient and pushes Lou but he says that he is not ready for marriage.

Lou is no stranger to brutality and is caught by his adoptive brother, Mike, in the act of raping a two-year-old girl. When Mike is accused by the child for the crime, he accepts the punishment for Lou and does time in jail for the crime. When Mike returns to town after serving his jail time, Lou's father helps secure him a position as a building inspector. Mike dies later in what is officially ruled an accident but Lou believes that Chester Conway, an important building contractor of the region, is behind Mike's death. Lou vows revenge but the vow remains on the back burner as years pass.

Lou devises a plan to get even with Chester Conway through his son, Elmer, who is also seeing Joyce Lakeland. Lou arranges for Joyce to ask Chester for a bribe, promising that she will leave town if he pays up, thereby leaving Elmer alone. Elmer plans to leave town with Joyce. In reality, Lou plans to kill them both, eliminating Joyce from his life while getting revenge on Chester. He shoots and kills Elmer, making it look like Joyce pulled the trigger, and beats Joyce. She survives though he is told that she dies later in the hospital.

Lou then sets about trying to kill Amy but is starting to have some people look to him as a suspect in the murders of Joyce and Elmer. The bum that Lou burned shows up about this time, telling Lou that he saw him at the Lakeland home on the night of the murders. Lou pretends to agree to pay a bribe to keep the bum quiet but actually sets the stage to make it appear that the man has killed Amy. He does this, beating Amy to death and causing the bum's death at the hands of police, but is suspected in those murders as well. Faced with inevitable arrest, Lou learns that Joyce is not dead—as he has known all along to be the case—and manages to kill her just before dying himself.

More summaries and resources for teaching or studying The Killer Inside Me.

The Killer Inside Me from BookRags. (c)2022 BookRags, Inc. All rights reserved.