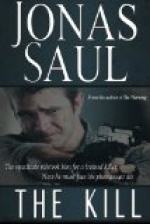 Get The Kill from Amazon.com
View the Study Pack
Study Guide
Order our The Kill Study Guide

Jonas Saul
This Study Guide consists of approximately 20 pages of chapter summaries, quotes, character analysis, themes, and more - everything you need to sharpen your knowledge of The Kill.

The Kill Summary & Study Guide includes comprehensive information and analysis to help you understand the book. This study guide contains the following sections:

This detailed literature summary also contains Topics for Discussion on The Kill by Jonas Saul.

The Kill is an entertaining and unique novel by Jonas Saul. In this novel, Darwin Kostas accidentally kills a mobster after the mobster survives a shootout at a peace meeting between rival mob leaders. Darwin then finds himself a target for execution by the mobster's family, including the man's very powerful and vengeful father. While on his honeymoon in Italy, Darwin is followed by several mobsters who make two attempts on his life before finally kidnapping him and his wife. Darwin finds himself in a position where he must face all his unusual phobias in order to save his wife and his father.

Vincenzo Fuccini arrives at a meeting of rival mob leaders in order to work out a peace treaty between the four powerful families. However, things go wrong from the very beginning when Vincenzo learns that the others are aware that he has brought bodyguards despite orders to the contrary. Then the meeting is overrun by another mob family and everyone is killed except for Vincenzo. Filled with confidence from his apparent invincibility, Vincenzo walks out of the warehouse where the meeting took place and begins to think of the future without these rival families. Vincenzo sees a car coming toward him and he waves for the driver to stop, then shoots at the car, but instead of stopping the car speeds up and runs Vincenzo over.

Darwin Kostas is in Italy on his honeymoon. Darwin has yet to tell his new wife of the threats he has received against his life in the aftermath of running down Vincenzo Fuccini, nor has he told her of the two attempts on his life during their time in Italy. Darwin plans to tell his wife, Rosina, on the plane to Greece. However, on the bus ride, a couple of Fuccini men attempt to stop the bus. This frightens Darwin and he decides the best thing to do is to get his wife out of the way and then throw himself at the mercy of the Fuccinis. Darwin tricks Rosina into getting on the plane without him and leaves. Darwin is greeted outside the airport by two Fuccini men and he allows them to take him captive.

As Darwin learns that negotiations are not going to work with the Fuccinis, his wife gets off the plane and makes her way back to the hotel where she and Darwin had been staying. On her way to get something to eat, Rosina runs into some Fuccini hit men who quickly load her into a car and take her to their boss. Rosina is tortured and threatened. However, when Mr. Fuccini gets word that Darwin somehow killed his men and escaped, Rosina is placed in a room and held as hostage.

Darwin makes his way to a busy bus station where he calls an FBI agent who helped him after the car accident. The agent advises Darwin to stay put and wait. However, Darwin identifies one of the Fuccini men at the station and uses a pencil to force the man to tell him what Fuccini's plans are for him. This is how Darwin learns that Fuccini has his wife. Darwin makes the man take him to Fuccini's office building in Rome where he is holding Rosina. The man then turns the tables on Darwin and tries to take him inside as his hostage, but Darwin gets the upper hand and kills the man by shoving him in front of a moving car. Darwin then breaks into the office building and rescues Rosina, but Mr. Fuccini escapes.

Darwin and Rosina are taken back to Canada in the company of their FBI friend, Greg Stinsen. When they arrive, Greg insists that Darwin and Rosina be placed in a motel under FBI guard because they have learned that the Fuccinis have kidnapped Greg's father. That night, they are also told that Rosina's parents have been kidnapped. Darwin insists on leaving the motel after Rosina goes to sleep, but he is picked up by two FBI agents. These agents tell Darwin they think one of their agents revealed to the Fuccinis where Rosina's parents were being watched and that it was Greg Stinsen. Darwin is then told that he and Rosina will be moved separately to another safe house.

On the way to the safe house, Darwin's car is run off the road. Darwin escapes and seeks help from Rosina's mother, whom he discovers was not kidnapped. It turns out the FBI thought Darwin was working with a rival mob family and they set him up to prove it. Instead, this situation leaves Rosina in the care of an agent who works for the Fuccinis. Darwin sets up a meeting with Fuccini to which the agent brings Rosina. With the help of a motorcycle gang, Darwin kills Fuccini and is placed in witness protection. However, the Fuccinis still manage to get to Rosina and Darwin where they have been relocated in Florida.

More summaries and resources for teaching or studying The Kill.

The Kill from Gale. ©2005-2006 Thomson Gale, a part of the Thomson Corporation. All rights reserved.