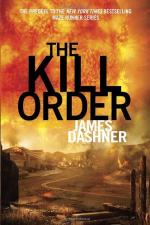 James Dashner
This Study Guide consists of approximately 36 pages of chapter summaries, quotes, character analysis, themes, and more - everything you need to sharpen your knowledge of The Kill Order.

This detailed literature summary also contains Quotes and a Free Quiz on The Kill Order by James Dashner.

"The Kill Order" is a young adult novel by James Dashner, which focuses around a group of individuals struggling to survive in the year after the Earth is ravaged by sun flares, all the while attempting to avert becoming victims of a deadly virus that is ravaging the eastern United States.

When the novel begins, the teenaged Mark, his girlfriend Trina, their friends Toad, Misty, and Darnell, together with army veterans Alec and Lana, have formed something of a makeshift family. They are encamped in the Appalachian Mountains in western North Carolina, living in a village of huts and crude shelters. For the first time in a year, things seem settled. One day, Mark and Trina are shocked to discover that a Berg, an airship, comes to the village, and men in hazardous material suits begin shooting the villagers with darts. Mark and Alec gain entry to the Berg, only to discover the darts are full of a dangerous virus, which comes to be known as the Flare. It drives people insane, ultimately killing them.

Mark and Alec return to the village to discover that Darnell has come down with the virus. Eventually, he dies. Misty later contracts the virus and dies, as does Toad. Mark, Alec, Trina, and Lana decide to head to the Berg's headquarters, seeking a cure. They trek through the woods, encountering a little girl named Deedee who is unaffected by the virus, as well as the members of her village who have been ravaged and rendered insane by the virus. Mark and Alec are separated from Lana, Trina, and Deedee by a fire caused by the insane people. They are captured by people at the Berg's headquarters. Mark and Alec infiltrate the base to rescue them, and they discover three things. First, the city of Asheville has turned its back on the Berg base; second, the virus is being spread deliberately to wipe out half the world's population to conserve resources; and third, Asheville has a Flat Trans, a transportation device linked to Alaska, where the PFC, the Post-Flare Coalition international government, is based. Orders have been issued to unleash the virus. The Berg base negotiates with the crazed locals, giving them Trina, Deedee, and Lana as ransom for time to attack Asheville. Mark and Alec rescue Trina, and Deedee. Alec puts Lana, who is near death, out of her misery.

Then, they fly a stolen Berg to Asheville, where Mark sends Deedee through the Flat Trans with a note saying she is immune to the virus, and she is somehow the cure as well. Meanwhile, the Berg base's operatives storm Asheville with an army of the infected, crazy people. Mark, Alec, and Trina have all come down with the virus. As Trina and Mark embrace, Alec crashes the Berg into the PFC building that houses the Flat Trans.

More summaries and resources for teaching or studying The Kill Order.