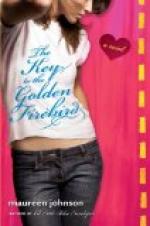 The Key to the Golden Firebird - Before. Summary & Analysis

Maureen Johnson
This Study Guide consists of approximately 36 pages of chapter summaries, quotes, character analysis, themes, and more - everything you need to sharpen your knowledge of The Key to the Golden Firebird.

The section begins with diary entries from May. She describes her father's Firebird.

May Gold and her 13-year-old sister, Palmer, are waiting in the local swim club's pool house for May's nemesis, Peter Camp. Peter is eleven months older than May and has made a habit of pulling practical jokes over on her since they first met - shortly after May was born. The Golds and the Camps are family friends who have spent a lot of time together over the years. Although May and Peter went to the same schools most of their lives, they were separated in high school when he went on to public school and the next year she began high school at an all girls school in downtown Philadelphia.

During the families' annual trip to Camden Yards, Pete played the ultimate prank on May. He told the baseball...

(read more from the Before. Summary)

More summaries and resources for teaching or studying The Key to the Golden Firebird.

The Key to the Golden Firebird from Gale. ©2005-2006 Thomson Gale, a part of the Thomson Corporation. All rights reserved.