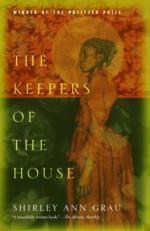 The Keepers of the House Summary & Study Guide

Shirley Ann Grau
This Study Guide consists of approximately 31 pages of chapter summaries, quotes, character analysis, themes, and more - everything you need to sharpen your knowledge of The Keepers of the House.

The Keepers of the House Summary & Study Guide Description

The Keepers of the House Summary & Study Guide includes comprehensive information and analysis to help you understand the book. This study guide contains the following sections:

This detailed literature summary also contains Topics for Discussion and a Free Quiz on The Keepers of the House by Shirley Ann Grau.

Shirley Ann Grau's The Keepers of the House is a multi-generational novel about an American family that transcends time, moving from pre- to post- Civil war eras. The Howland family estate encompasses many acres in the rolling hills of Wade County. At the time that the property was chosen, William Marshall Howland had just been discharged from the American War war of 1812 and wanted little more than a place to call home and a view of the Providence River. He built the home with his own hands. William was murdered by marauding Indians, but both his name and his property were passed on through the generations that followed. Over time, the farm was expanded upon and slaves were employed to help maintain its extensive fields. The family harvested cotton, corn, sorghum, hogs and tobacco, as well as participating in extensive lumbering. Shirley Ann Grau uses the home as a permanent fixture and pivots the characters and events of the time against its durability.

At a time when northerners fought southerners and families were pitted against one another based solely upon the color of their skin, Grau weaves the tale of a widowed, wealthy, and well known man of the community who falls in love with his housekeeper, Margaret. Margaret is black, and comes from an area known as New Church. They sire three children together, all of whom are mulatto by definition. Meanwhile, William Howland's daughter from his first marriage returns home with a child of her own. As a result, all of William's children as well as his granddaughter, Abigail, live together at the same time on the Howland farm. Margaret's children, named Robert, Nina, and Crissy, were sent to boarding schools in the north to receive the education and unbiased future that every parent hopes for their child. Generations pass and the scandal is forgotten until William Howland's granddaughter marries a politician and the story is unfavorably resurrected. Despite Abigail's family history, her husband leans towards segregation and his constituents are unhappy when they learn the details of certain branches of his wife's family tree. Abigail comes to realize that her husband is not as devoted to her as she is to him. Upon examining his behaviors she learns that he is no longer the honorable man she believed him to be. Like her grandfather, although her marriage crumbles and the townspeople talk, Abigail Tolliver is strong and capable of living in the big house by herself. She defends the house, as well as her grandfather's memory, in bold ways that shock the town and damage its economy.

More summaries and resources for teaching or studying The Keepers of the House.

The Keepers of the House from BookRags. (c)2022 BookRags, Inc. All rights reserved.