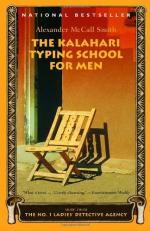 Plot Summary
+Chapters Summary and Analysis
Chapter 1, How to Find a Man, and Chapter 2, Learn to Drive with Jesus
Chapter 3, To Kill a Hoopoe, and Chapter 4, Trust Your Affairs to a Man
Chapter 5, The Talking Cure, and Chapter 6, Old Typewriters, Gathering Dust
Chapter 7, What Mr. Molefelo Did, and Chapter 8, The Typewriters, and a Prayer Meeting
Chapter 9, The Civil Service, Chapter 10, The Kalahari Typing School for Men Throws Open its Doors (to Men), and Chapter 11, Mma Ramotswe Goes to a Small village to the South of Gaborone
Chapter 12, The Miracle that was Wrought at Tlokweng Road Speedy Motors, Chapter 13, Tea at the Orphan Farm, and Chapter 14, Mr. Bernard Selelipeng
Chapter 15, A Disgruntled Client, and Chapter 16, Mma Ramotswe Gets a Flat Tyre; Mma Makutsi Goes to the Cinema with Mr. Bernard Selelipeng
Chapter 17, Finding Tebogo, and Chapter 18, A Radio is a Small Thing
Chapter 19, No. 42 Limpopo Court, and Chapter 20, Two Awkward Men Satisfactorily Disposed of
Free Quiz
Characters
Objects/Places
Themes
Style
Quotes
Topics for Discussion
Order our The Kalahari Typing School for Men Study Guide

Alexander McCall Smith
This Study Guide consists of approximately 24 pages of chapter summaries, quotes, character analysis, themes, and more - everything you need to sharpen your knowledge of The Kalahari Typing School for Men.

This detailed literature summary also contains Topics for Discussion and a Free Quiz on The Kalahari Typing School for Men by Alexander McCall Smith.

The Kalahari Typing School for Men is the fourth installment in the No. 1 Ladies Detective Agency series by Alexander McCall Smith. In this novel, Mma Ramotswe has moved her detective agency to the offices of the Tlokweng Road Speedy Motors due to her fiancé JLB Matekoni's depressive illness. Her assistant, Mma Makutsi, works for both businesses but finds herself struggling to make ends meet as she watches both businesses sit on the edge of failure. Mma Makutsi decides she must start her own business to make more money, eventually beginning the Kalahari Typing School for Men. At the same time, Mma Ramotswe takes on two cases. Her first case is a job to find a young woman her client once abandoned and the second to find out if a woman's husband is cheating on her. One of these cases will cause Mma Ramotswe to struggle between her sense of morality and honesty in her job.

Mma Ramotswe is worried about her foster children and her fiance. On top of this she learns a new detective agency has opened across town. This agency, called the Satisfaction Guaranteed Detective Agency, is run by an unpleasant man who claims to have been a member of the CID and to have lived in New York for a time. Mma Makutsi is convinced that this new detective agency will drive them out of business, especially when they see the advertising brochure for Satisfaction Guaranteed Detective Agency that claims that a man is better than a woman at solving mysteries.

A short time later, Mma Makutsi has an epiphany that many men do not know how to type but they do not want to take classes alongside women. This thought inspires Mma Makutsi to begin a typing school especially for men. Mma Makutsi borrows a dozen typewriters from her secretarial school and classroom space from a local church to begin her business. During the first class, Mma Makutsi learns one of her students is in love with her and they begin to date.

Mma Ramotswe is approached by a man who has recently had a near death experience and has decided he would like to seek forgiveness from people he harmed in the past. This man tells Mma Ramotswe about a girl he once dated who became pregnant and asked for his help. The man stole a radio from the family he was living with and sold it to pay for his girl to have an abortion. Now the man wants to make amends both to the family he stole from and the girl he abandoned in her time of greatest need.

Mma Ramotswe begins her search immediately and has little trouble finding the woman in whose home the man once lived as a student. This woman is shocked to learn that the man once stole from her, but she quickly forgive him. This widowed woman has trouble of her own. She has taken custody of her grandchild, orphaned when her mother died of AIDS. The child too is thought to have the illness and the grandmother fears she will not survive childhood.

During this investigation, Mma Ramotswe is visited by a woman from a neighboring city who is concerned about her husband. This woman works in the other city, but her husband works locally, therefore they live in two different homes. The woman is concerned that her husband has not been home in the evenings and that this might mean that he is having an affair. As Mma Ramotswe begins to look into this matter, she is shocked to discover that Mma Makutsi is dating her client's husband. Mma Ramotswe visits the man and encourages him to return to his wife and to let Mma Makutsi down easily.

Finally, Mma Ramotswe visits her male client and sets up a visit for him with the woman he once lived with. Mma Ramotswe then arranges for the man to pay the woman money she can spend on her AIDS afflicted granddaughter. Mma Ramotswe also encourages her client to pay for the nursing education of his old girlfriend's eldest daughter. In this way, the man is able to make amends for everything he feels he has done wrong in his past.

More summaries and resources for teaching or studying The Kalahari Typing School for Men.