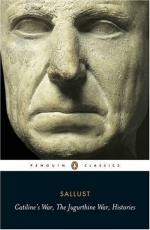 This detailed literature summary also contains Topics for Discussion and a Free Quiz on The Jugurthine War by Sallust.

Sallust's book documents two important historical events in the Roman Empire, the Jurgatine War and the Conspiracy of Catiline. They occur at a time the Romans had acquired great comfort in their lives. Sallust describes this comfort as having a detrimental effect on Roman society with money more important than glory. In such an environment, the libertine, Lucius Catiline, rises to great prominence and almost causes the downfall of the Roman government. The African King, Jugurtha, takes advantage of corrupt Roman officials to rise, virtually unimpeded, to the position of King of the Roman province of Numidia.

In the first part of the book, Sallust details the Conspiracy of Catiline. Sallust tells the reader how the dictator Lucius Sylla has created an environment where the Romans hold material wealth more important than honor and virtue. Within this environment, the violent Catiline garners the support of the youth, the poor and even criminals, and runs for consul.

He sends his best men to nearby parts of Europe and garners more support by promising that if he gets into power, they will be freed of all their debts. This works well, but he ruins it somewhat by attempting the assassination of the new consul, Cicero. By this time, the senate realizes that Catiline is plotting the downfall of the government, but they cannot act, as they do not have enough proof.

After a confrontation with the senate, Catiline joins the army he has situated outside Rome and advances towards the city. This causes the Rome public to fear for their lives; finally the Senate realizes that they have to do something. They send the consul Antonio to lead an army towards the advancing Catiline, and the other council Cicero stays in the city. Cicero organizes the capture of a number of Catiline's main men and takes them in front of the Senate. They all confess and uncover Catiline's plan to burn Rome; their confessions lose Catiline the public's support.

Meanwhile, Catiline hears that his friends have confessed and decides to turn back towards Gaul. Unfortunately, Quinton Metellus Celer second-guesses him, and Catiline finds himself surrounded by both Antonio and Celer's armies. Despite a significant disadvantage, Catiline knows he has no choice but to fight. After a brave display by his men, Catiline, on the verge of defeat, rushes to the front and the Romans slaughter him.

In the second part of the book, Sallust details the Jugurthine War. Jugurtha is a brave, African soldier adopted as a son by the Numidian King Micipsa. After Micipsa's death, the Numidian kingdom is divided between the three sons, Adherbal, Hiempsel and Jugurtha. Hiempsel, in particular, cannot accept Jurgurtha as his brother and questions his father's decision in making Jugurtha joint heir to the throne. Jurgurtha, however, has great ambitions, and he immediately succeeds in assassinating Hiempsel.

Adherbal sends warning signals to Rome, but Jurgurtha has since discovered he can buy Roman support, and he already has a great many allies among the Roman nobles. The Senate divides Numidia between the two brothers, but Jurgurtha gets the best deal and sets about invading his brother's half. Finally, Jugurtha tortures and kills Adherbal and takes control.

The Romans send in a number of consuls to resolve the situation, but Jurgurtha bribes them all and proceeds as before. It is not long before Memmuis makes the public aware of the corrupt nobility, and a tribune forces the Senate to send in the honorable Metullus. He sets about taking over Numidia and embarrassing Jurgurtha's army so much that Jurgurtha is on the run in his own country. At this point, Maruis takes over from Metullus and intensifies the assault on Jurgurtha. In reply, Jurgurtha elicits the support of King Bocchus, and they enjoy a number of successful attacks on Maruis' troops.

Eventually the Roman's overpower the Numidians and King Bocchus calls for talks. He says that he made a mistake in joining Jurgurtha, and he will now do anything to help the Romans. The Roman's decree that it was a bad error on Bocchus's part, but tell him he can make amends by helping them capture Jurgurtha. On agreement with the Romans, Bocchus organizes a meeting with Jurgurtha, which the Romans ambush. The Romans capture Jugurtha and take him back to Italy in chains.