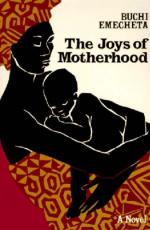 Buchi Emecheta
This Study Guide consists of approximately 56 pages of chapter summaries, quotes, character analysis, themes, and more - everything you need to sharpen your knowledge of The Joys of Motherhood.

The Joys of Motherhood Summary & Study Guide includes comprehensive information and analysis to help you understand the book. This study guide contains the following sections:

This detailed literature summary also contains Quotes and a Free Quiz on The Joys of Motherhood by Buchi Emecheta.

The following version of this book was used to create this study guide: Emecheta, Buchi. The Joys of Motherhood. George Braziller, Inc., New York, NY, 1979. 2013 Edition, with introduction.

While the novel’s structure is very much that of a traditional linear narrative, the manner of its telling has a strong feel of traditional oral storytelling. Its vocabulary, in both narration and dialogue, tends to be that of the author, not its characters; there are frequent digressions, in terms of content and point of view, from the central narrative line; and the novel’s themes combine with the expanse of time covered by the narrative to suggest a parable-like sensibility and perspective.

The novel begins in the mid-1930’s, and is set in Nigeria. The first chapter portrays the reaction of protagonist (and new mother) Nnu Ego to an unidentified trauma in her home. She runs blindly through the streets of Nigeria’s largest city, Lagos, seeking relief from pain that is both physical and emotional. Her attempt to gain that relief by jumping off a bridge into a river is stopped by concerned neighbors, who berate her for not thinking of her infant child. This triggers memories in Nnu Ego that are narrated in three chapters of flashback, narrative that explores the complex relationship between her parents, her troubled first marriage, and her second to a soft-bellied laundry-man named Nnaife, a marriage that resulted in the birth of a son who died a few weeks after being born. As the flashback concludes, that death is revealed to be the trauma that caused Nnu Ego’s attempts to flee her home and end her life.

As the narrative returns to its present-day timeline, Nnu Ego returns home, and begins the long process of rebuilding her life after the death of her son. In this she is helped by friends more than she is by Nnaife, who seems unable to recognize what the death of their son means to his wife. This lack of awareness of what his wife is going through continues as he becomes increasingly lazy, following the loss of his laundry-man job; becomes increasingly distracted by the demands of a second family (i.e. having to take in one of the wives and children of his deceased older brother); and repeatedly gets drunk as he tries to distract himself from what he sees as the pressures of his life.

As time passes, Nnu Ego becomes pregnant several more times, giving birth to two more sons and a pair of twin daughters. As she struggles to make sure that they, and Nnaife’s second family, are all fed, she becomes increasingly angry with Nnaife, pushing him harder and harder to get a job even as she runs a small business of her own. Eventually, Nnaife gets a job serving on a British warship, deployed as part of the Allied war against the Nazis in World War II (setting this section of the novel in the 1940’s). Nnaife is gone for months at a time, leaving Nnu Ego with an even more complicated struggle to maintain her household. As her children age, that struggle includes finding ways to pay for their education.

Eventually the war comes to an end, and Nnaife comes home permanently. Narration portrays him as having been emotionally wounded as a result of his experiences, a wounding that contributes to what becomes the novel’s climax, set in the 1950’s: Nnaife’s violent assault on the family of a man that one of his daughters plans to marry without his permission. As a result of his being jailed and losing his income, and also as a result of several other circumstances (her oldest son going to America to study, her two oldest daughters getting married, and Nnaife’s second family having moved into their own home), Nnu Ego chooses to return to her home village. It is not long before her own mental health deteriorates, and she soon dies, having mistaken a ditch by the side of the road for her bed at home.

More summaries and resources for teaching or studying The Joys of Motherhood.

The Joys of Motherhood from BookRags. (c)2022 BookRags, Inc. All rights reserved.