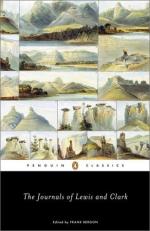 Plot Summary
+Chapters Summary and Analysis
The Corps of Discovery Shoves Off
From the Platte to the Vermillion
Between the Vermilion and Teton Rivers
To the Mandan Country
Among the Mandans
Leaving the Mandans
To the Yellowstone
From the Yellowstone to the Musselshell
From the Musselshell to Maria's River
Great Falls of the Missouri
Among the Grizzly Bears
Three Forks of the Missouri
Three Forks to Beaver's Head
Reaching the Great Divide
Across the Rocky Mountains
Downward Toward the Coast
...And Gazed at the Pacific
Fort Clatsop
The Return Journey Begins
Wallawallas and Nez Percé
The Bitterroot Range
The Expedition Divided: Lewis and the Indians
The Expedition Divided; Clark in the Yellowstone
Last Lap
Free Quiz
Characters
Objects/Places
Themes
Style
Quotes
Topics for Discussion
Order our The Journals of Lewis and Clark Study Guide

The Journals of Lewis and Clark Summary & Study Guide

Meriwether Lewis and William Clark
This Study Guide consists of approximately 55 pages of chapter summaries, quotes, character analysis, themes, and more - everything you need to sharpen your knowledge of The Journals of Lewis and Clark.

The Journals of Lewis and Clark Summary & Study Guide Description

The Journals of Lewis and Clark Summary & Study Guide includes comprehensive information and analysis to help you understand the book. This study guide contains the following sections:

This detailed literature summary also contains Topics for Discussion and a Free Quiz on The Journals of Lewis and Clark by Meriwether Lewis and William Clark.

The Corps of Discovery, a crew of over 40 men led by Captain Clark, leaves Camp Dubois in Wood River, Illinois, on May 14, 1804. They are traveling aboard 3 boats: 1 huge 55 feet long keelboat and two pirogues. They pick up their co-captain, Meriwether Lewis, in St-Louis. On May 25, they reach the last settlement of white men on the MIssouri River, a agglomeration of seven habitations named La Charette. On the Fourth of July, they celebrate by firing the cannon of the keelboat and drinking in a creek they christen Independence Creek.

On August 3rd, the Corps officially meets with a small delegation of Oto and Missouri Indians. The Captains use diplomacy to convince the Indians to keep the peace with the neighboring tribes in exchange for prosperity guaranteed by the United States. Sergeant Charles Floyd dies from illness in Sioux City, Iowa, on August 20. A few days later in Dakota, the Corps befriends the Yankton Sioux and Captain Lewis wraps an Indian newborn in an American flag, declaring him an American. In September, the journals record nearly 300 species of plants and animals yet unknown to science: antelopes, deer, coyotes, etc. The crew captures a prairie dog with the intent of shipping it back to Jefferson. In South Dakota, the Corps stays with the local Teton Sioux and manages to avoid a fight with the tribe with the help of Chief Black Buffalo.

The expedition reaches North Dakota and encounters the communities of the Mandans and the Hidatsas, who live in huge villages made of earth-lodges. The Corps decides to build their winter camp across the river from the main village and name it Fort Mandan. During their stay, they hire a French Canadian trader, middle-aged Toussaint Charbonneau, as an interpreter through his young wife Sacagawea. In January 1805, members of the expedition participate in the hunting of buffalo. The intense cold causes frostbite amongst the hunters; Captain Lewis is forced to amputate the frozen toes of a young Indian boy. A month later, Sacagawea, the wife of Toussaint Charbonneau, gives birth to a boy named Jean Baptiste. Captain Lewis helps with the delivery with a potion made from the crushing of the rings of a rattlesnake's rattle.

In April, the Captains send a dozen crewmen downstream aboard the keelboat. The boat is loaded with samples meant for Jefferson. The samples include various mineral, animal and plant specimens, including live animals. On the same day, the remaining crew of 33 men departs for their journey westward aboard the two pirogues and six dugout canoes.

The party reaches an area filled with rich wildlife and flora; they encounter herds of thousands of buffalos and the famed grizzly bears. In May, they reach the White Cliffs of the Missouri. Early in June, the Corps reaches an area undocumented on their map where the river seems to split in a fork. The captains know from the Hidatsas that if they encounter a huge waterfall, they are following the right route. The members of the Corps believe the northern fork is the right one, but the captains conclude otherwise. Lewis and a small team of men scout ahead on the south fork and encounter the Great Falls of the Missouri. Due to the difficult conditions of the terrain, the party portages around the falls for nearly a month.

The Corps reaches Lemhi Pass, located at the border between present-day Montana and Idaho. With more mountains to traverse, the party is in dire need of horses. They stop at a Shoshone village, where the Chief turns out to be the brother of Sacagawea, and negotiate 29 horses, 1 mule and the company of a Shoshone guide they need. In September, they reach the Bitterroot Mountains. They run out of food, snow starts falling and the mountains seem to have no end. Nearly starving to death, the party reaches the village of the Nez Percé Indians and the men are able to eat and recover.

In early October, the expedition reaches Clearwater River (Idaho) and the current finally pushes their new canoes toward their destination. They get to the Columbia River but find only fish to eat; they resort to eat the dogs bought from the native tribes. A couple of weeks later, they see Mount Hood in the distance and conclude they are finally near their goal.On November 7, Clark writes the Ocean is finally in view and they can hear the waves crashing on the shores. The party elects, through the popular vote of all its members, that they will establish their winter quarters on the south side of the Columbia; the spend Christmas in Fort Clatsop.

The Corps departs from Fort Clatsop on March 23rd, 1806, and heads home. They decide to spend nearly a month with the Nez Percé once again, waiting for the snow to melt and clear the way through the Bitterroots Mountains. The Corps splits in two groups: Clark heads down the Yellowstone River while Lewis explores the Marias River. In late July, Lewis' party confronts a few Blackfeet warriors trying to steal their horses and guns; two Indians are killed in the scuffle that ensues. Afraid of reprisal, the group flees toward their rendezvous point with Clark at the mouth of the Yellowstone.

In mid-August, they are back at the Mandan villages. John Colter is discharged from the Corps on his own request, as well as Charbonneau and his family. The Corps of Discovery races toward its destination, reaching it on September 23. By then, most U.S. citizens seem to have given up on the explorers and think they are all dead; they are welcomed as national heroes.

More summaries and resources for teaching or studying The Journals of Lewis and Clark.

The Journals of Lewis and Clark from BookRags. (c)2022 BookRags, Inc. All rights reserved.