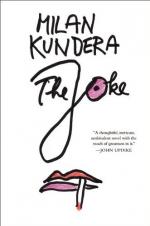 Get The Joke from Amazon.com
View the Study Pack
View the Lesson Plans
Study Guide
Order our The Joke Study Guide

Milan Kundera
This Study Guide consists of approximately 29 pages of chapter summaries, quotes, character analysis, themes, and more - everything you need to sharpen your knowledge of The Joke.

The Joke Summary & Study Guide includes comprehensive information and analysis to help you understand the book. This study guide contains the following sections:

This detailed literature summary also contains Topics for Discussion and a Free Quiz on The Joke by Milan Kundera.

The Joke is a novel by Milan Kundera that is about a man named Ludvik Jahn and his life until the age of 37. The novel covers the events in his life from various perspectives roughly from the time of his adolescence until the time he is 37, but does not follow a linear pattern. Instead, the novel concentrates on how Jahn's actions influence others and affect those individuals that come in contact with him.

The novel starts with Jahn entering into his hometown of Morava with a specific goal in mind. We will later learn that his goal and intentions are anything but admirable or heroic. When Jahn sees a woman that he once loved dearly, he is taken back to his past and spends the majority of the novel reminiscing on what happened to him as an adolescent.

Jahn had his life fully thought out when he was a teenager — or so he thought. He was dating a girl named Marketa and well immersed in the Socialist Party. He went to University and was considering taking one of many high-level positions upon his graduation. He's smart and intelligent, although he has been chastised in the past for being an "independent thinker," which is not encouraged among Party members.

When his girlfriend goes away to a special training camp sponsored by the Party, she writes him that she is having a wonderful time, embracing all of the Party doctrine. He writes her a postcard and includes a sarcastic remark seemingly against the Party on the card. He does not hear from his girlfriend for the rest of her time at the Camp, save a terse, perfunctory review of what she is doing. Meanwhile, Party members have seen the postcard and decide to eject Jahn from the Party and all of its benefits there within. He is kicked out of university and his entire life destiny is washed away in moments.

To re-educate himself, Jahn is sent to a detention center, where he works in the mines and performs various strenuous exercises under a commander. The idea is that hard labor will reverse his trifling comments about the Party and make him a stauncher member of its political viewpoint. While he is there, he meets a woman named Lucie while on one of his breaks from the camp. He immediately falls in love, although admits that he is as much in love with her in the surroundings as anything else. He does not love Lucie for herself, but instead for the situation in which she was presented to him.

During their time while Jahn is in the detention camps, Lucie brings him a bouquet of flowers and hands them to him through the barbed fence because they cannot see each other often. He is rarely released for free time off the camp and this is their best way to communicate. Her loyalty and love provide hope and light for him during a difficult time in his life, yet he never asks much about her nor learns her own personal story. It is as though she exists for him. Eventually, he tries to meet her to consummate their relationship, but she fights him off at the last minute and he is immediately angered. They never see each other again while either is in Ostrava.

After he leaves the mines, Jahn floats around. He does not make a serious commitment in his life after the trials that have happened to him. Instead, when he meets Helena Zamenek, he decides to seduce her solely because she is the wife of Patel Zamenek, the man who led the charge to condemn him and throw him out of the Socialist Party. However, he learns that even this attempt at revenge is ill-fated because Patel no longer cares for his wife and wants a divorce from her. Her one-night stand with Jahn convinces her that divorce is best and rather than avenge this man, Jahn realizes he has actually helped him.

This news makes Jahn distraught, but Helena tries to commit suicide when she learns what has happened. In the end, Jahn realizes that his entire life has been a joke and utterly fruitless.

More summaries and resources for teaching or studying The Joke.

The Joke from BookRags. (c)2022 BookRags, Inc. All rights reserved.